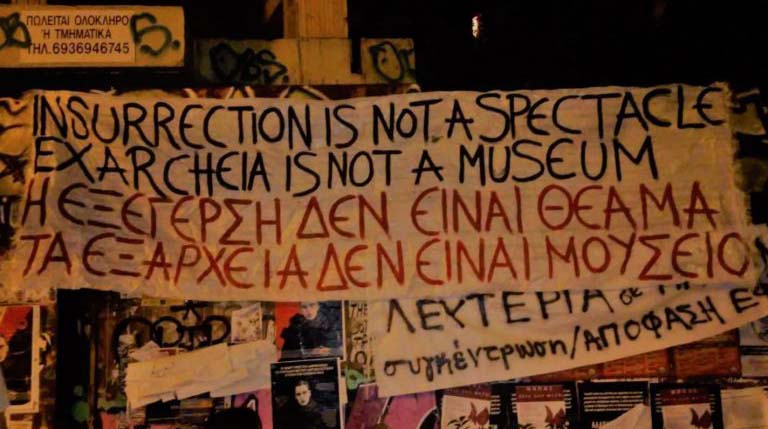 Exarchia takes on a unique role in Athens with its long history of antiauthoritarian and anarchist movements. The neighborhood hosts 23 squats and several self-managed community spaces and it is located right in the city center, next to one of the highest income class neighborhoods Kolonaki. Nevertheless, it remains a symbol of resistance and solidarity.
Squatted places are known to give hom to a number of outcasts, with the spaces hosting a big number of migrants and refugees, providing people with safer living conditions than that of official refugee camps.

The neighborhood is a focal point of access and integration to services of legal representation, employment, healthcare and cultural activities that one can find in an urban setting. Exarchia not only has self-organised enclosed spaces but self-organized public ones. Community kitchens, scarce but vital green areas, pop-up markets, workshops, spaces for contestation and dance are often organized by community centers. These events provide assistance in overcoming an overall systemic marginalisation of people in economic and other social terms, creating space for intercultural exchange, openinness and sense of belonging.

Currently, the newly elected central right-wing party, with its neoliberal and growth driven agenda enacted upon its electoral campaign promise to “restore law and order”. Thus, armed police forces executed an organised eviction of four squats, under the observation of a helicopter on 26.08.2019. The operation resulted in the eviction of hundreds of people including families with small children and brutal attacks on protesters. The evicted asylum seekers and refugees have been sent to detention centers which lack in provision of services and are often located in remote peri-urban settings.

The underlying tone behind this act of aggression is that government authorities need to showcase control over Exarchia and facilitate a sense of security in the eyes of foreign investment which will only accentuate the gentrification rate in the neighborhood. The state following a tight immigration policy is detaining refugees and asylum seekers in state-led camps, essentially cutting off any opportunity to lead a normal life or exercise their rights as citizens. The disruption of autonomous governance mechanisms and networks of solidarity came at the same time of anti-drug and gun trafficking operations, a well timed effort to eradicate crime as well as free services to people fleeing from war. In a sadly repeated pattern, state control fails to see the opportunity of facilitating bottom-up actions of integration and community development, but chooses to eradicate them in the name of control. 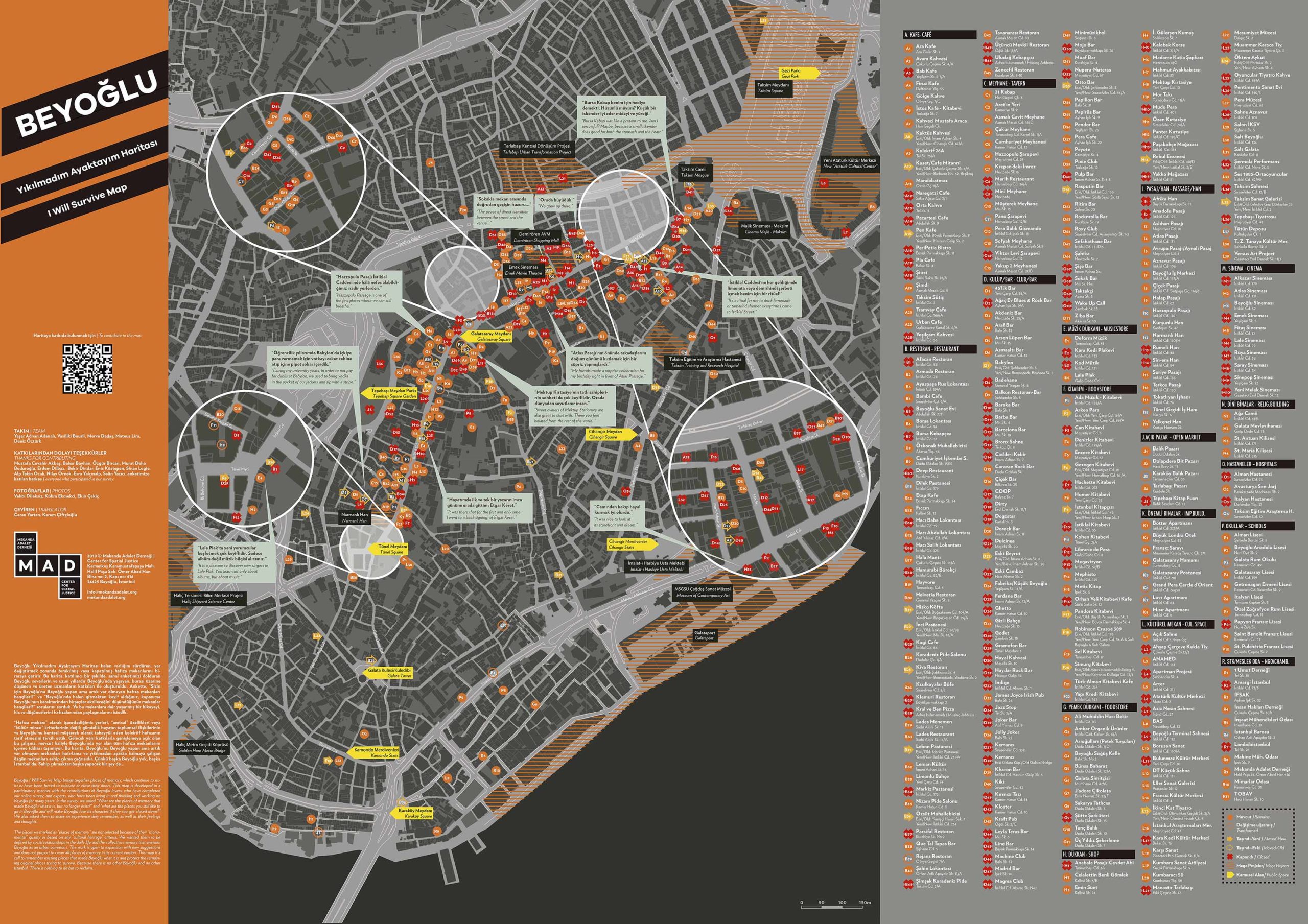 Beyoglu has been shaped as the heart of the city, a historical and cultural hub with theaters, cinemas, bookstores, artisanal workshops, art galleries, restaurants, cafes, bars and music venues, gathering a variety of people from diverse backgrounds. However, a recent process of transformation, characterised by commercialization, depoliticization, gentrification projects and large scale, market-oriented urban development, has resulted in an increasing amount of memory places to disappear and the diverse and culturally rich Beyoglu to transform into a homogeneous space for consumerism and cultural consumption.

“Memory places” are the places with a unique identity and history, where social relationships happen and which shape the character of the area. Through this mapping project, we aimed to give these places visibility and highlight the fact that Beyoglu is losing them, one after another. At the same time, the map shows that some spaces remain and somehow a kind of resistance can be found in the area.

We designed the map in a participatory manner, by using the information collected through an online survey, questionnaires distributed in local shops and detailed interviews with local experts. We also had several walks in the area led by Yasar Adanali (urbanist) and Sinan Logie (architect) to understand the characteristics of the area and the variety of spaces. The map has three main parts: The places of memory in front and timeline and the stories on the back page. We pinned the memory spaces mentioned by the people and categorized them under; remains, transformed, moved and closed to reflect the dynamics of transformation. Apart from ‘places of memory’ we also added the mega projects and public spaces which are under control and commodification, to show the pressure in the area.

Memory is a powerful tool to encourage collective action, as it speaks to something that may unite citizens around a common issue. Therefore, the map can be used by local residents, activists, visitors, traditional users and newcomers as a tangible instrument for locating and recognizing the transformation of memory spaces in Beyoglu and hopefully to reclaim local identity and spatial justice in Beyoglu.

The project was held by Vasiliki Bourli, Merve Dadas and Mateus Lira during the internship period at the ‘Centre of Spatial Justice’ in Istanbul in March 2018. ‘Centre of Spatial Justice’ is a cross-disciplinary, independent institute which engages with a series of urban issues in Istanbul and other cities in Turkey. The team uses maps, videos and participatory tools to involve citizens and promote more just urban environments. 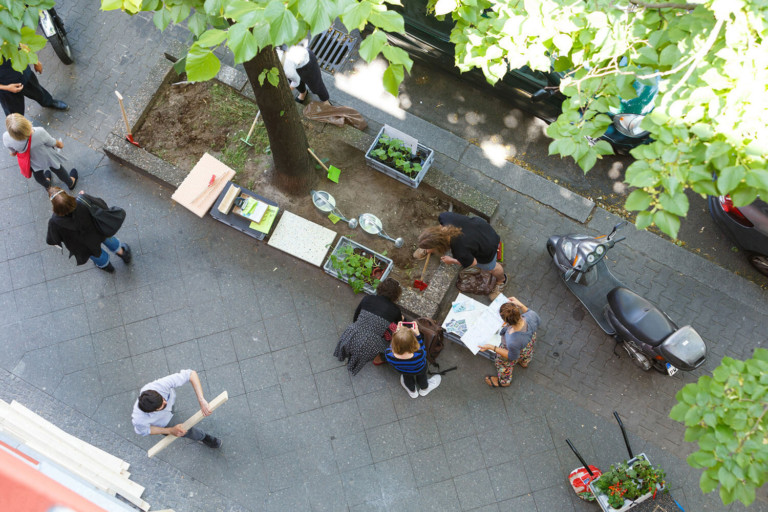 Local residents and tradespeople of Sonnenallee (one of Berlin’s major traffic arteries) worked together with the teams of place-making and Atelier Fanelsa on tactical revitalization of the avenue tree pits. Together they discovered  the possibilities of altering their everyday life environment with minimal intervention.

The interventions included cleaning and repairing the existing street furniture, putting up easily reproducible wooden fences around the tree pits, planting herbs  and applying traditional stone gardening techniques. A garden-crate was built using the carriage of a pushcart to make a gathering spot for participants and a conversation starter for passer-bys.

During the construction, gardening methods were used as much for function as a way to be artistic and poetic, creating space for consciousness and recognition of the unused margin in the familiar space of a busy traffic artery. 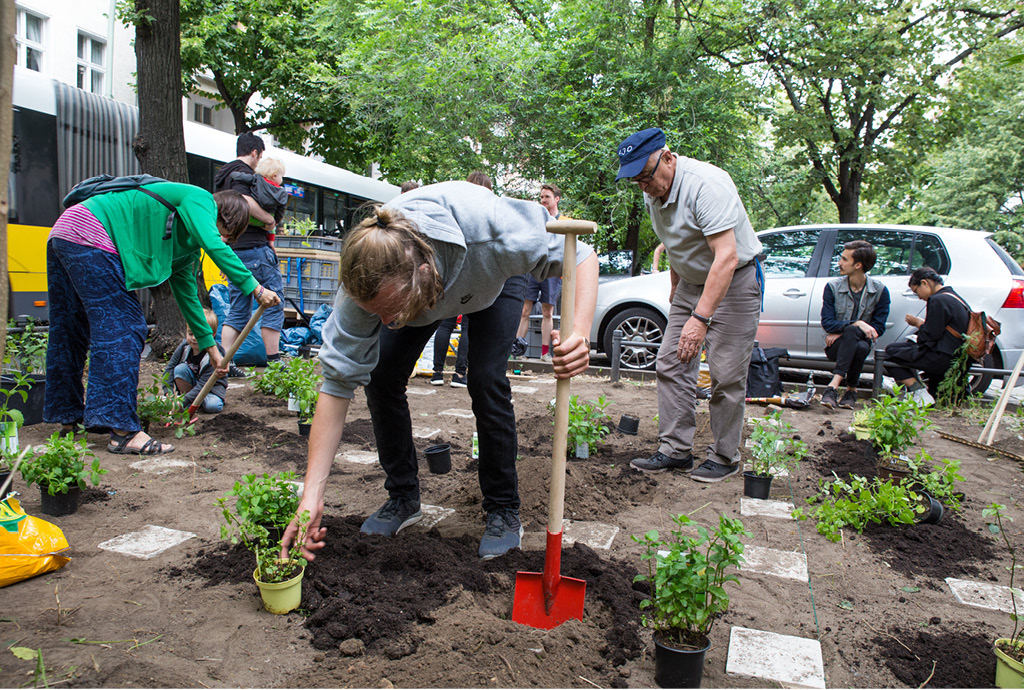 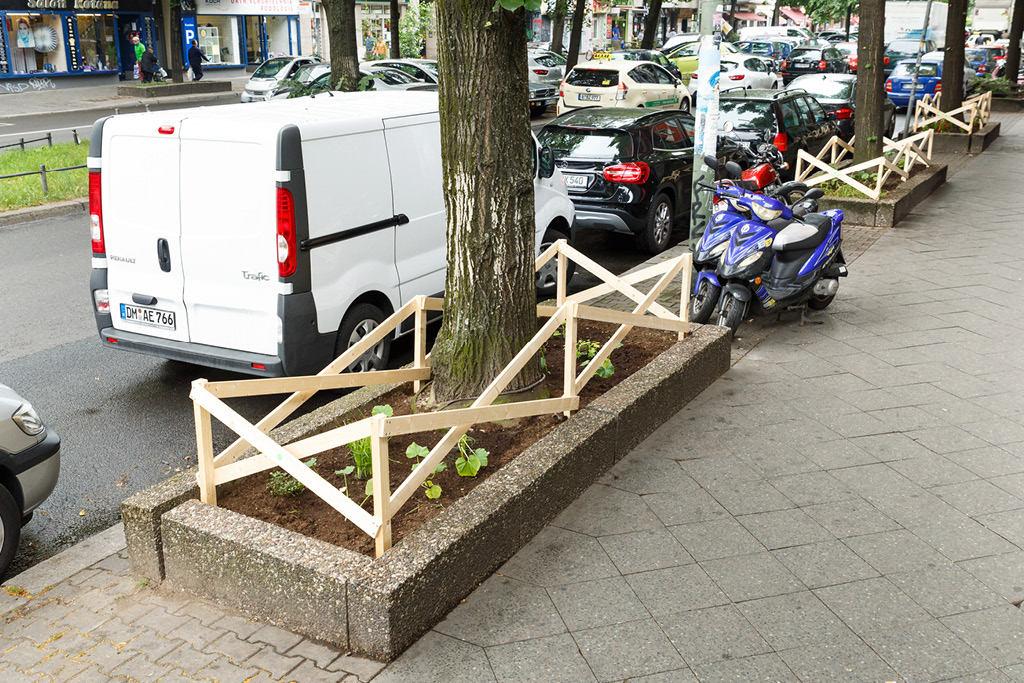 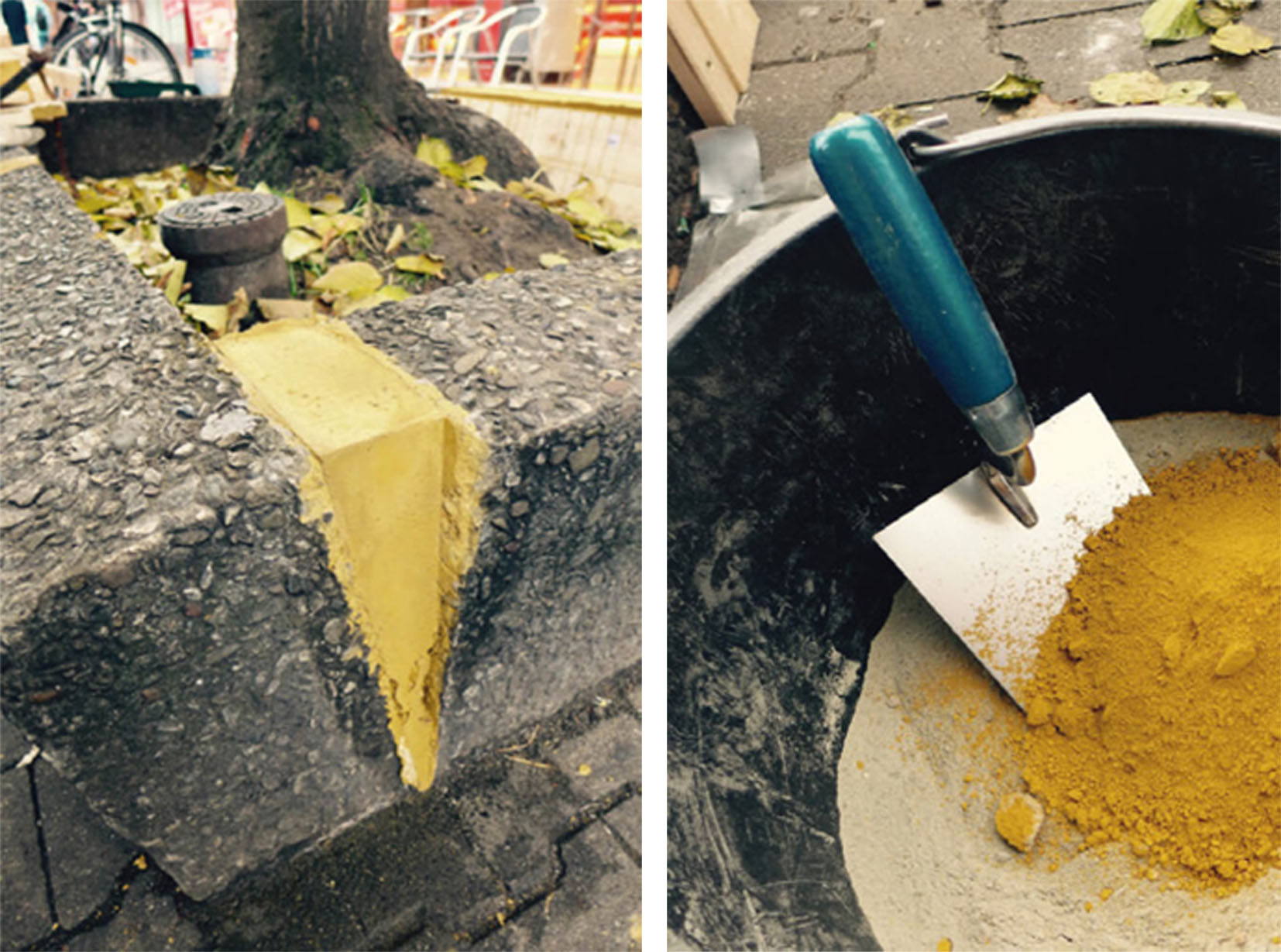 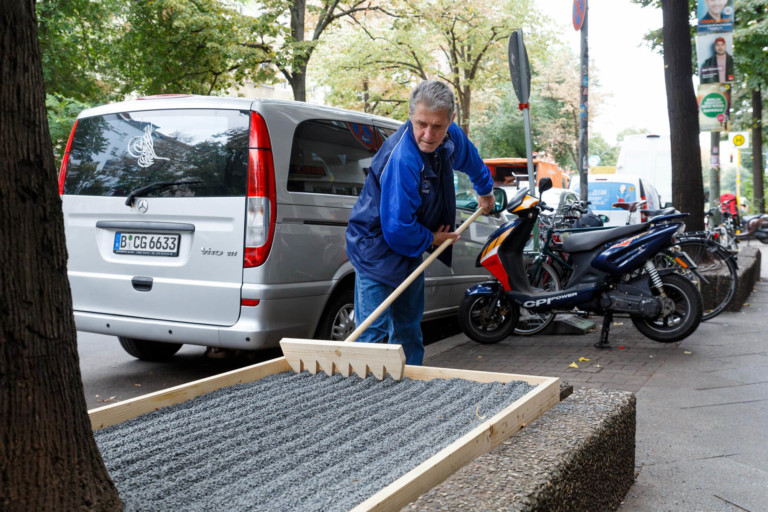 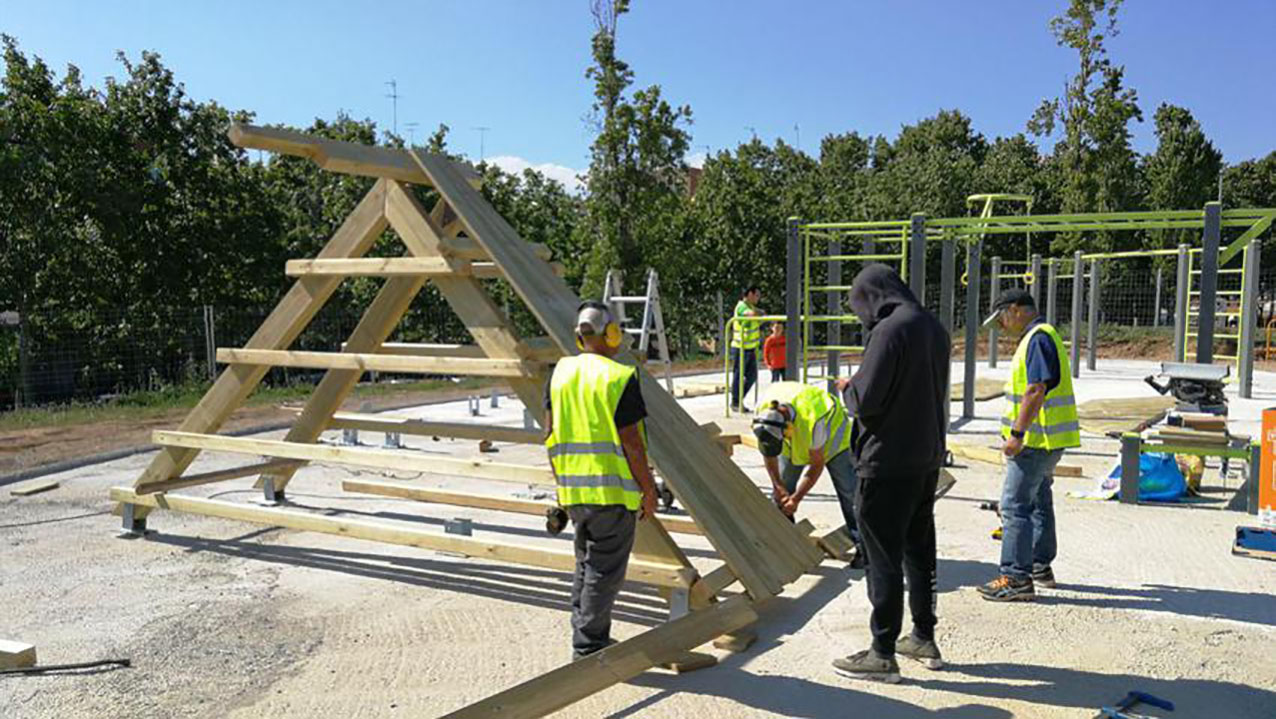 The team of Straddle3 rethought the concept of a “ronda” path by designing outdoor sports, recreation and resting areas following a participatory process from the design to construction of the outdoor gymnastics area.

The project is located in the green belt surrounding the Trinitat Vella neighborhood which it seperates from the highway and constitutes an important cultural heritage landmark with Rec Comtal (irrigation canal) being there since the Medieval times. The project also highlights how the cultural memory of this heritage site is recovered as reflected through several of the design concepts, such as the same “new” name for the road, the introduction of natural materials and earth based colours,  tracings which are reminiscent of water flowing and an homage to the existing vegetation with an additional renaturalisation consisting of indigenous flora found in the riverbank.

The main design elements of the project varied between road connectivity between focal points of local resident circulation, a local request for more lighting to increase sense of security and an open-air sports space to promote social inclusion and leisure activites.

TXP (Todo Por La Praxis) is a multidisciplinary collective of architects, designers and artists based in Madrid. The collective developed a prototype called DITD (Do It Together Device) which includes a workbench and a bubble structure offering a covered and private space for renting. The prototype’s infrastructure provides the basic elements to start a collective activation process on an abandoned/unused space as a catalyst for many possible capacities. TXP established a citizen initiative for the rehabilitation of a parking lot. They managed to execute it as part of the collective’s residency at the Headlands Center For The Arts (San Francisco, CA) researching and experimenting on the transformation of urban spaces.

The team also initiated a platform providing the monitoring and sharing of the device. https://todoporlapraxis.es/052-do-it-together/ 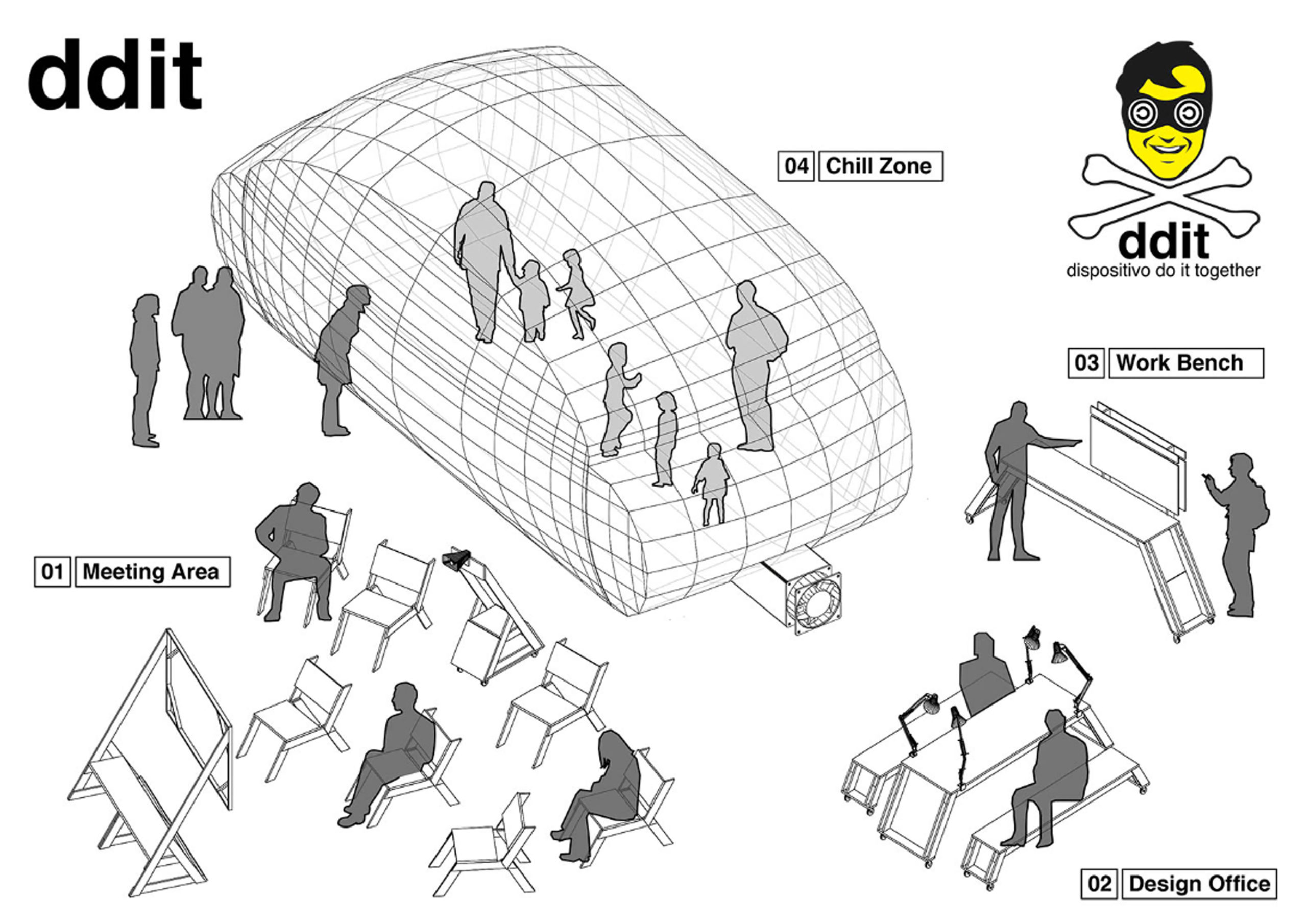 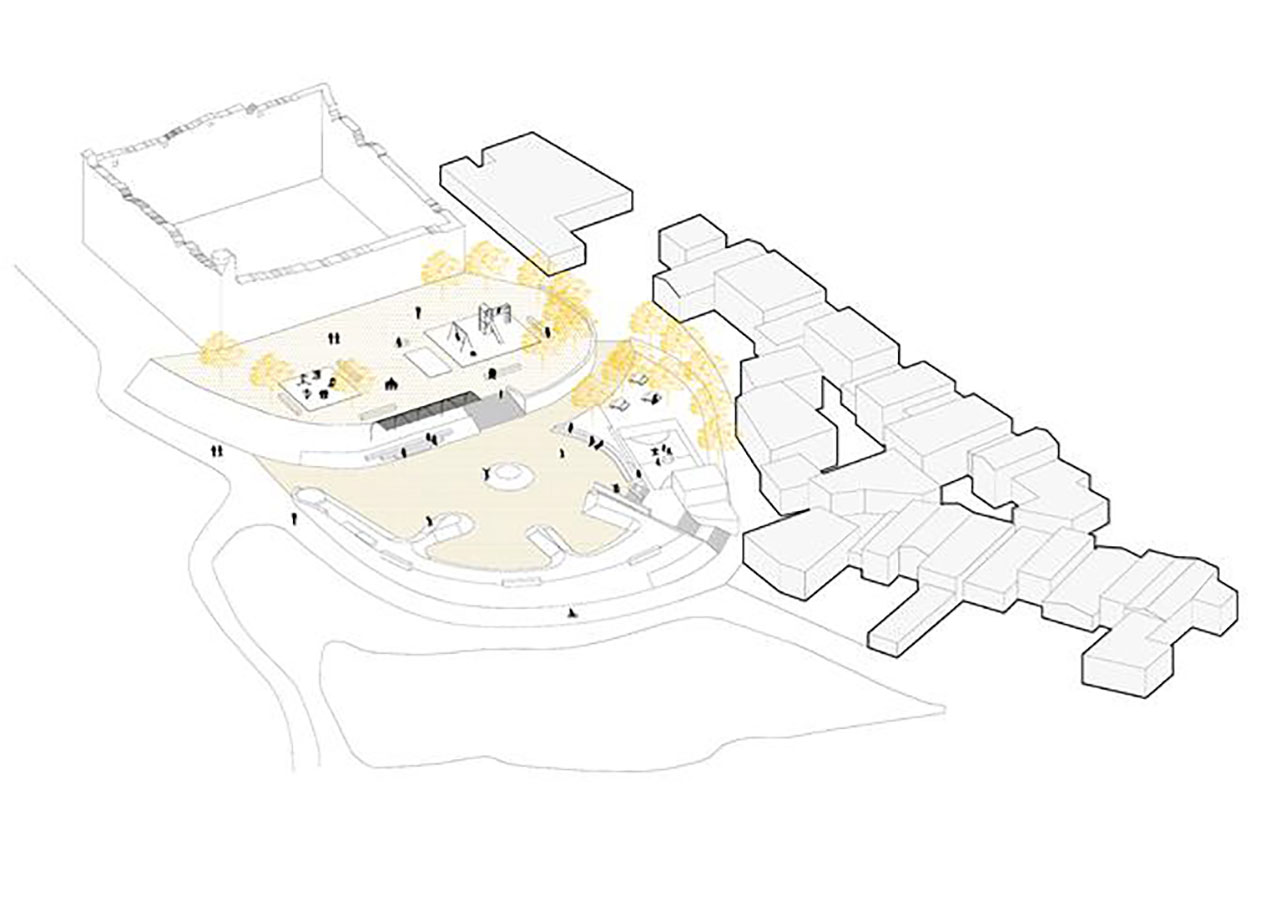 Straddle3 has led an urban sports park project, Malda Park, next to medieval castle of the town. The project is a good example of public space production with citizen participation in all phases of the process, from design to construction, supported by digital tools for publicity and transparency of the processes. The website has a blog, image gallery, announcements and forum asking the future users their opinions or debating issues.

The project also proves that a skatepark can be open to other uses for everyone from all ages and work as a multifunctional public space. The importance given to use of reused and recycled materials is another asset of the project, creating awareness about how to manage the resources we have. 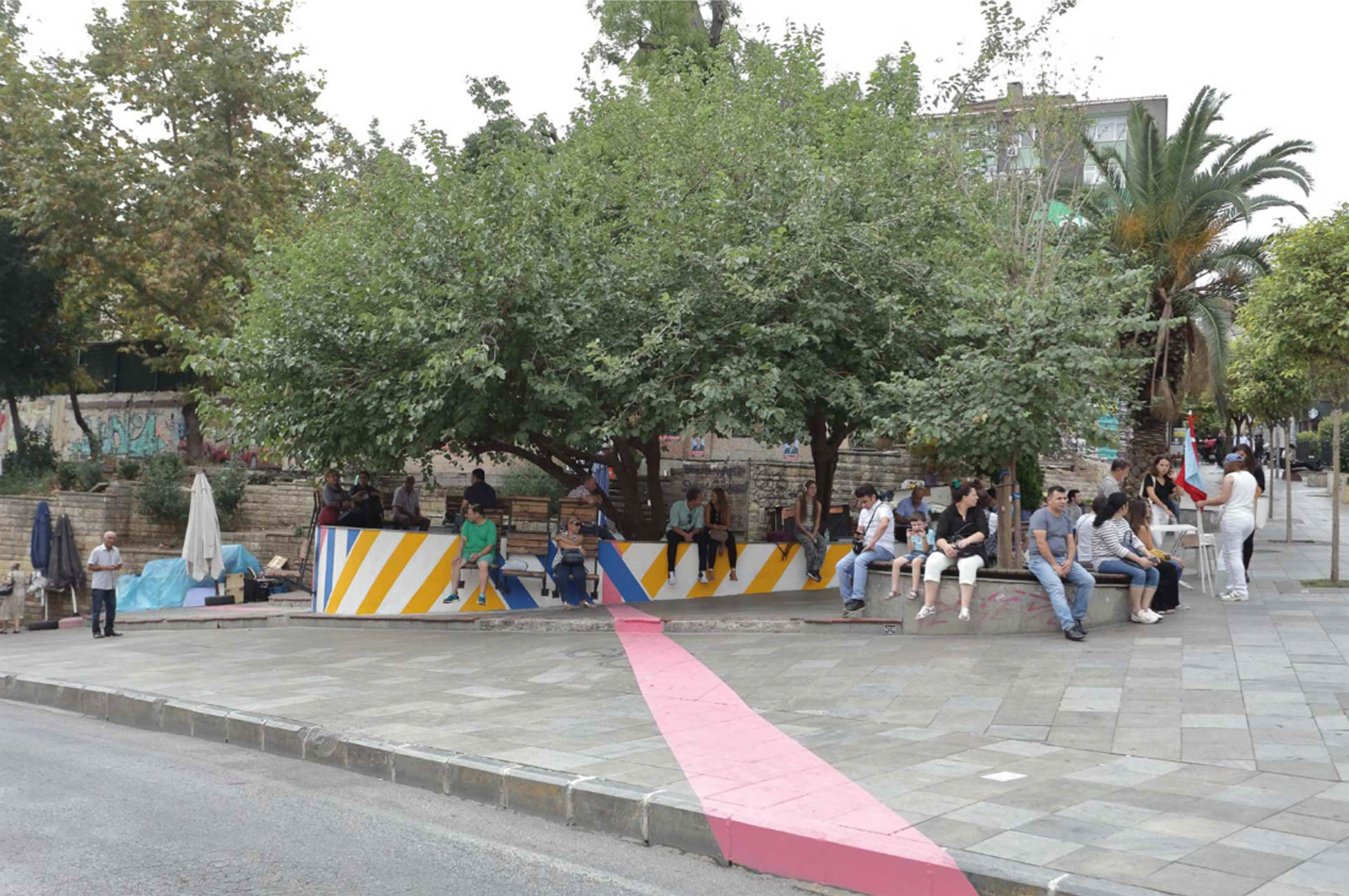 The place is settled under big trees with a surrounding short wall at Bull Square, one of the most important meeting points of Kadikoy, Istanbul. The intervention is held by a collaboration of the collectives, Architecture for All (HiM), Design Atelier Kadıköy, Hablar en Arte, designtrak, Repairs Club, Todo Por La Praxis and Pico Colectivo in order to enhance existing qualities and improve the use of the space. The place was selected by the collectives, then its uses and needs were analysed through observations and interviews. Significant issues with adequate or ineffective seating areas were identified and residents were invited to participate in the production through an open call.

Double sided benches by metal box profiles and wood were designed, which would hang on the existing short wall to increase number of seating. The place was painted with colourful stripes to accentuate identification. Participants were trained in welding iron as well as wood cutting so that they could construct the furniture on their own without any exterior help. 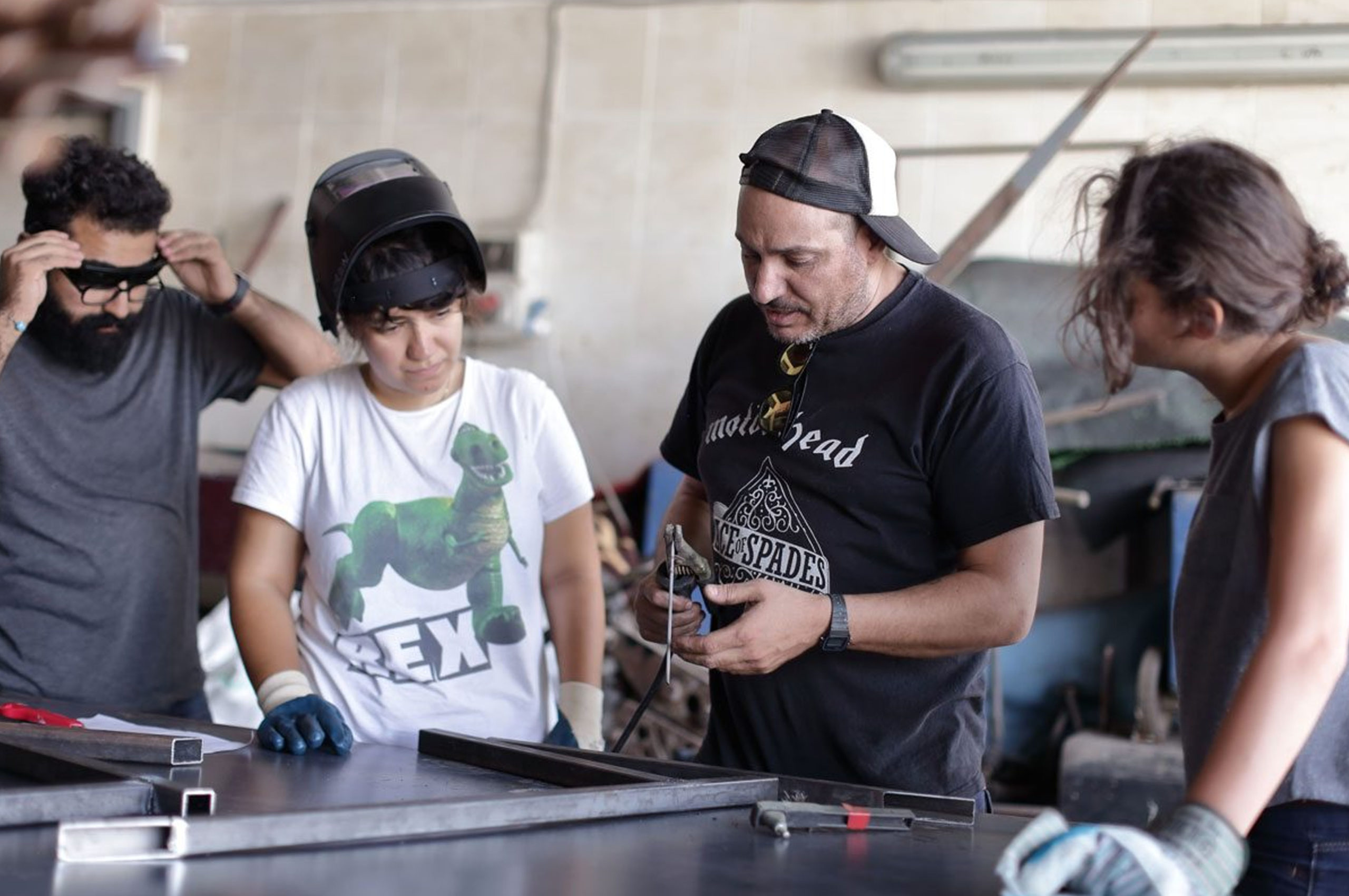 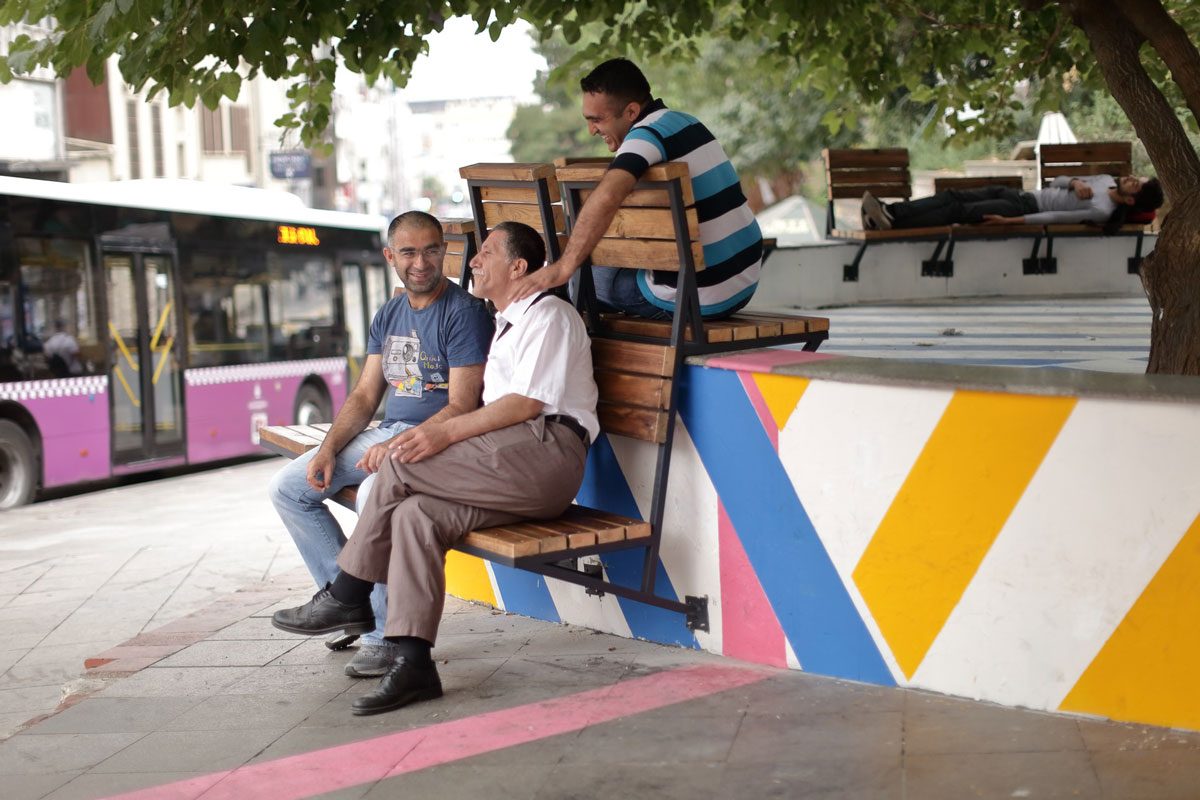 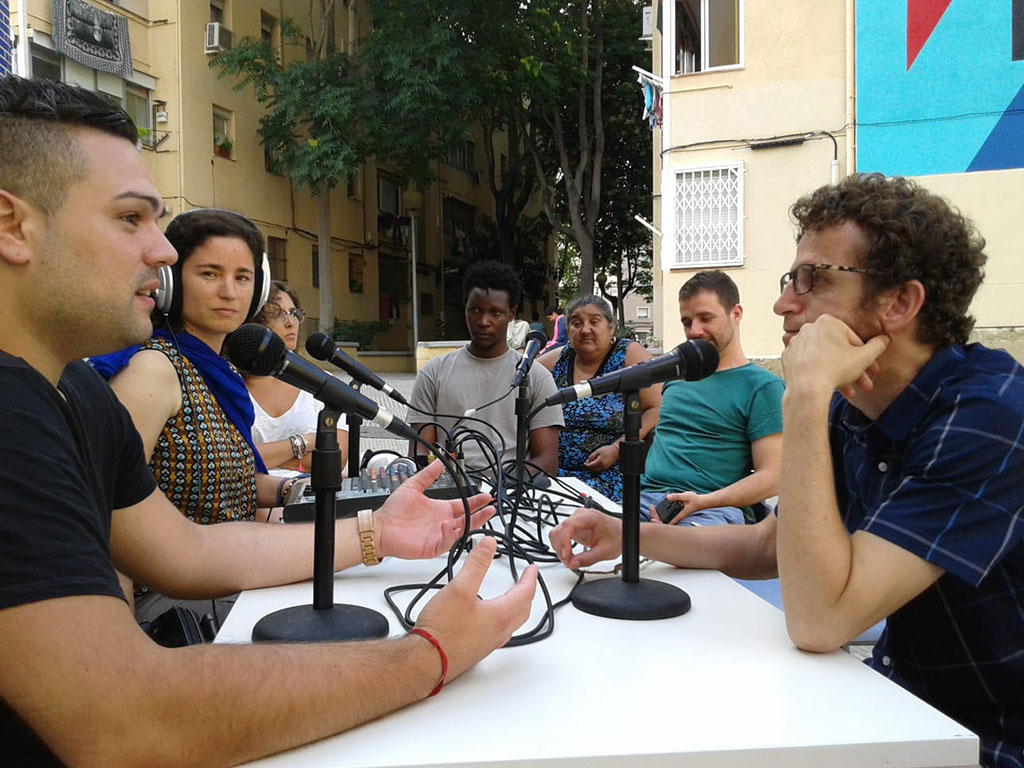 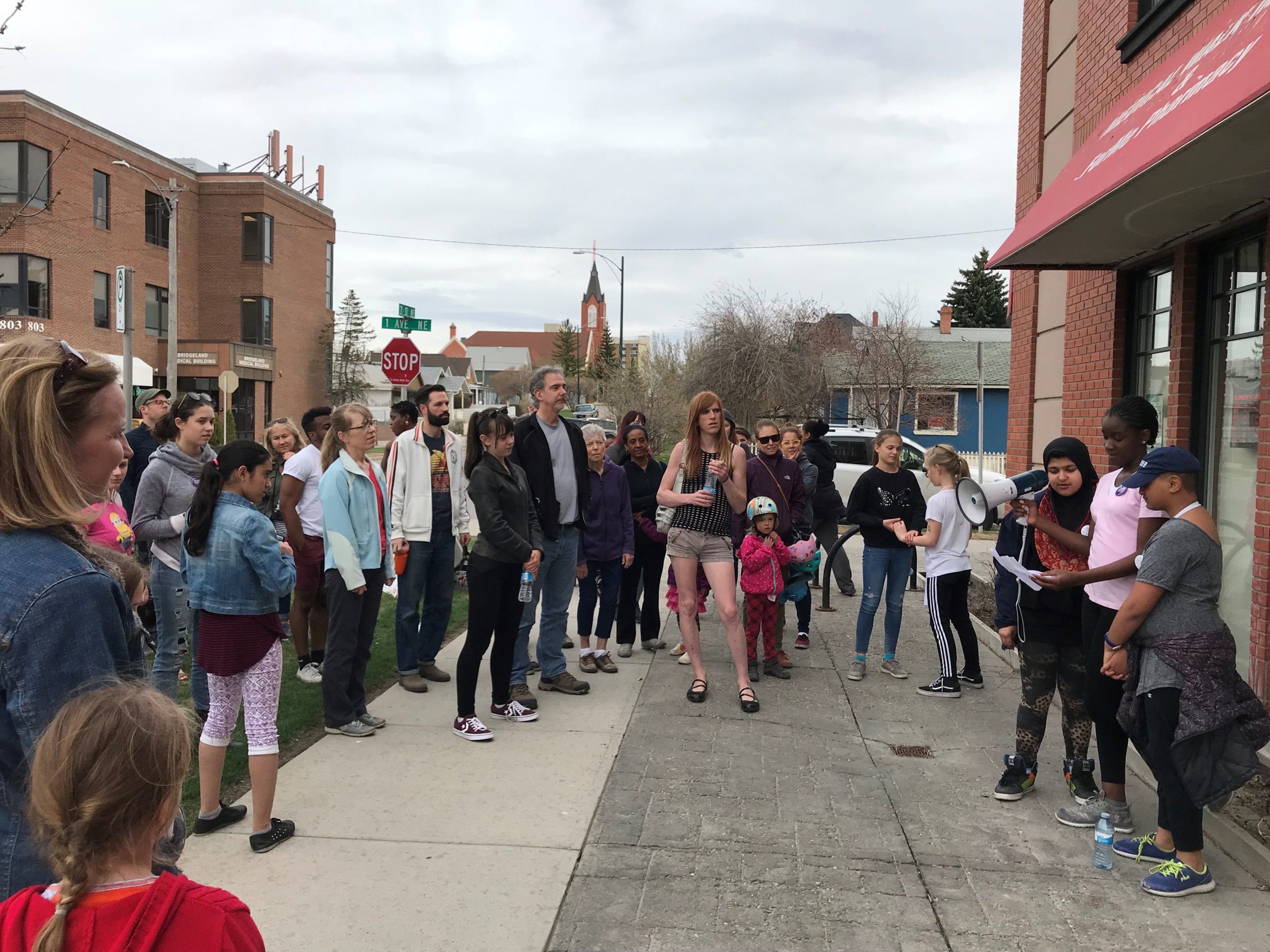 On the first weekend of May of each year, the Jane’s Walk festival takes place in hundreds of cities around the world. Jane’s walks encourages people to share stories about their neighborhoods, discover unseen aspects of their communities and use walking as a way to connect with their neighbors.

Held as part of the Jane’s Walk weekend, the Girls Walking Tour was organized in Calgary, an opportunity for girls to critically think about the world around them and express their ideas and opinions.

The girls focused their thoughts to include important topics throughout five stops along the way. In one of the stops they talked about healthy relationships and the importance of consent in all areas of life. In another point, the subject of sexism in video games was discussed, in another, racism, and in another about gender stereotypes. 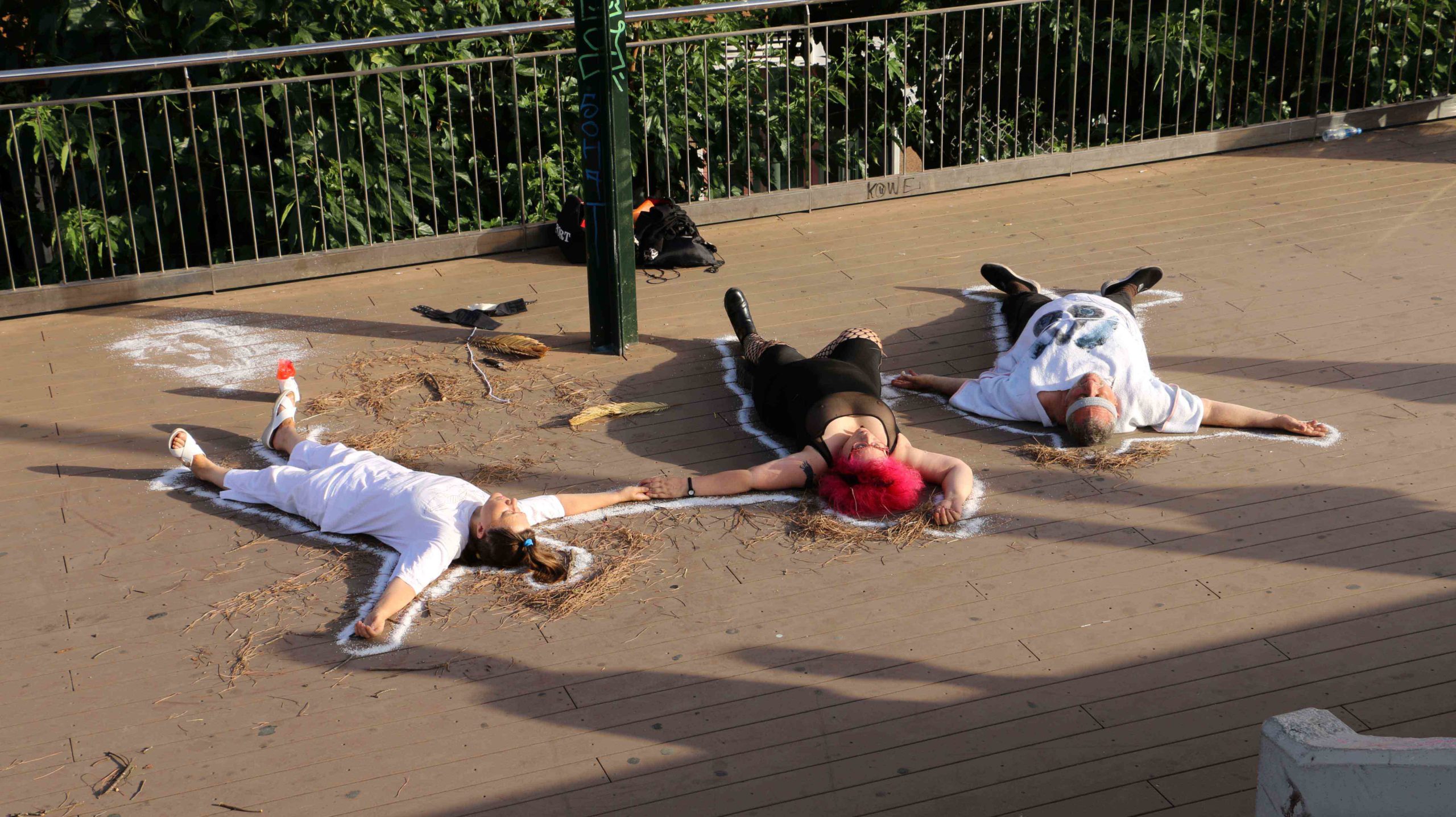 On June 20 an open session was convened in the public space to carry out the Workshop – Laboratory for older adults ESTAR JUNTOS, carried out by the artist Víctor Prados Pinto.

The workshop focused on the courage to say the unsayable, to sing the unsingable, to dance the undanceable, to express the inexpressible. It was proposed as an exercise to confront traditional social values ​​and their transformation, a moment for old age itself to take to the streets to present itself and expose their point of view in a creative way in this era of individualism, passive consumerism and excessive technologies.

Bodies and voices were used as tools to build communication devices to show the world the desires, aspirations and concerns of people through this performance in the streets of Torrassa. 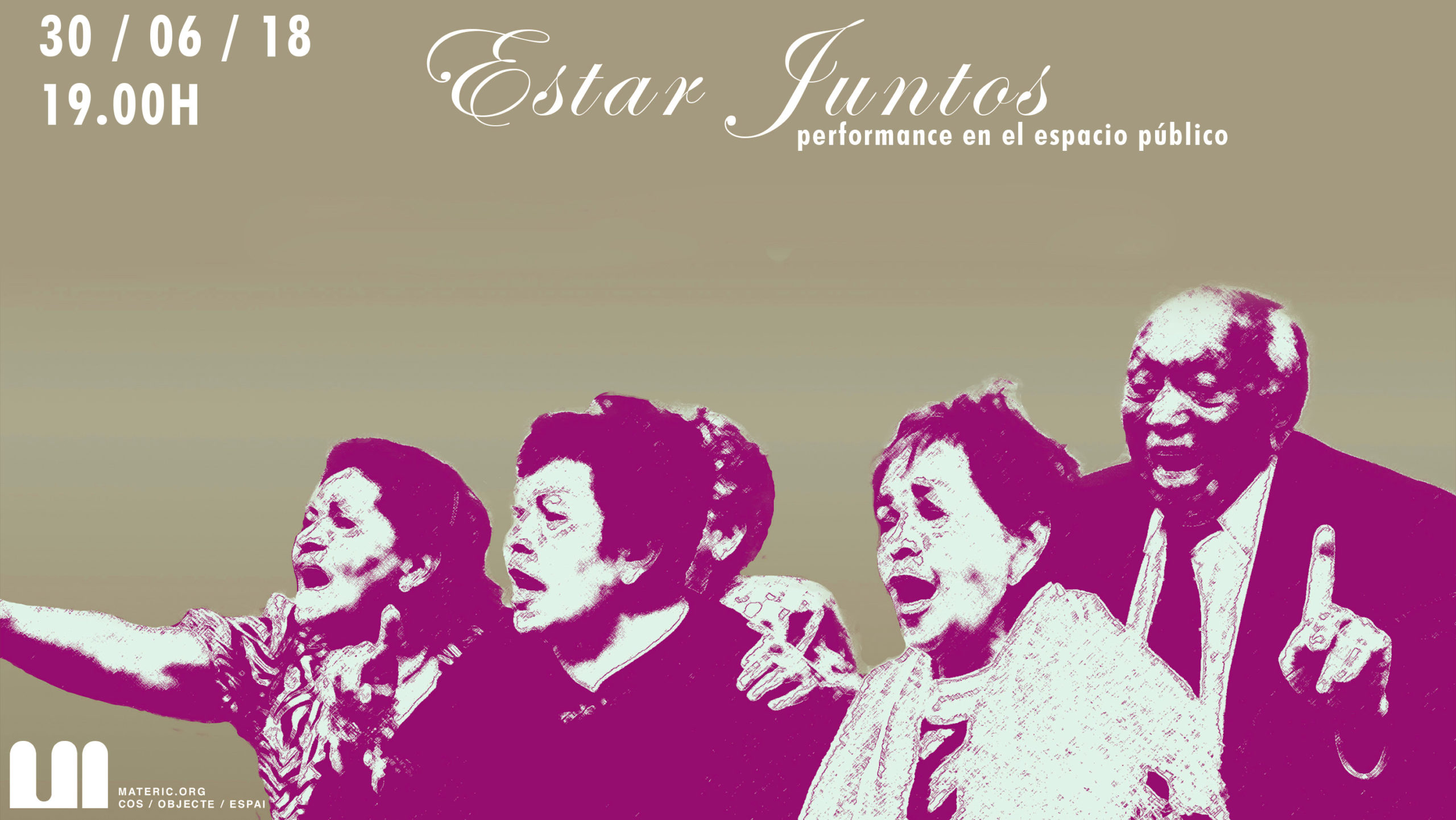