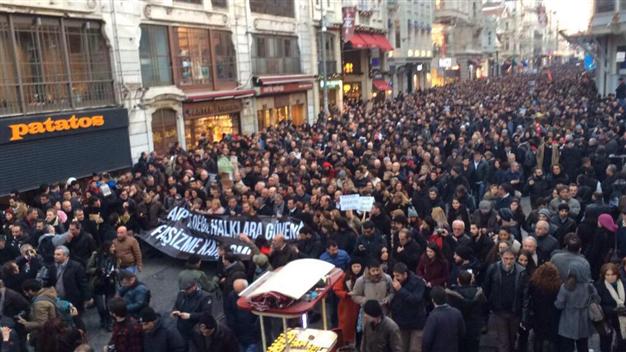 The AKP government is currently pushing the bill, which it has renamed as the “Legal Package To Protect Freedoms,” after postponing parliamentary debate on the matter twice. The government says the police need more powers to preserve public order and the safety of citizens, particularly on the eve of elections scheduled for June. They claim that more peaceful protests turn violent with the increasing use of Molotov cocktails and are also concerned about the recent spread of bonzai, a synthetic drug.

All opposition parties, on the other hand, have pledged to prevent the bill from becoming law, arguing that it would give draconian powers to the police. Their criticism is focused on the claim that the government designed the bill to suppress free speech rights by justifying future crackdowns on secondary threats.

After some ruling party deputies signaled that the bill might be “moderated” during parliamentary sessions, President Recep Tayyip Erdoğan took a staunch line on Feb. 20, vowing that it “will pass one way or another.”

But what kind of changes will the bill bring? And how do the government and opposition parties support or oppose these changes?

Here is an explanation in seven points:

How it is now: Since 2007, Turkish police have not had the legal authority to conduct strip searches or searches on a car’s trunk and interior without the approval of a judge or prosecutor.

How it will be: A police chief who is assigned by the highest administrative chief, such as the provincial governor, will be able to order a strip search or a car search. Judges and prosecutors will be bypassed at this stage.

Government: This change is in line with the European Union acquis communitaire. The person who is subjected to a search will be notified by the police in written form, which would then be approved or canceled by a court. This is a control mechanism stronger than the current system.

Opposition: For 24 hours, any person in Turkey will be at the mercy of the police. He or she will be deprived of their legal right to object to the practice of the police during a tense situation in which their human rights will be more vulnerable to violations. If police abuse their power with arbitrary measures, it will be too late for the judiciary to protect a citizen’s rights.

How it is now: According to the current Turkish Penal Code, only the judiciary can detain a person to take him or her into custody. And the police can take testimonies only in the police center.

How it will be: The bill gives the police the right to detain a person if it deems the situation as in flagrante delicto. Officers will be able to keep him or her in custody for 24 hours without seeing a judge. This period will be extended to 48 hours, if the police deem that there is a “collective crime.” The police will also be able to take testimonies of witnesses and victims at their homes or offices.

Government: Currently, police are not able to detain a person even when they catch a thief in a house. This is a power that all police forces in European countries have. With the new law, only police chiefs, who are assigned by the highest administrative chief, will be able to order detentions and only when the situation is in flagrante delicto.

Opposition: According to CHP deputy Rıza Türmen, a former judge of the European Court of Human Rights, “the police only catch, not detain.” The right to freedom can only be limited by giving the citizen legal guarantees and under the oversight of the judiciary, he says, stressing that the police cannot judge based on “criminal suspicion.”

3) Removing from the scene

How it is now: The current law on the authority of the police (PVSK) states the categories of people that security forces are legally entitled to ‘catch’ (a prosecutor can then order them to be ‘detained,’ while only a court can ‘arrest’ them).

How will it change: Besides “catching” them, the bill gives the police the authority to “remove” such people. Moreover, “those who risk the safety of others” have been added to the list as another category.

Government: The police need preventive powers, but it will never be accusing a protester of possible provocation and removing or her from the scene with no reason. The British police have a similar legal authority.

Opposition: The police will be able to “kidnap” people from protests and demonstrations. The bill does not state how and where the “removed” people will be kept by the police. How they will be protected from possible abuses is another question. For instance, if an innocent young woman in a protesting crowd is singled out by a policeman and taken into a forest, what would happen?

Gezi protester Ethem Sarısülük was killed by a policeman in Ankara on June 14, 2013

How it is now: The current PSVK limits the cases in which the police are legally allowed to use firearms.

How it will be: The police will be able to use firearms against those who “use or attempt to use Molotov cocktails, as well explosives, inflammables, incendiaries, suffocating devices, or injurious or similar arms.”

Government: Molotov cocktail attacks increased from 472 to 1,994 between 2009 and 2014, killing three policemen and four citizens in the past six years. The bill is more about classifying Molotov cocktails as a weapon, just like Germany, the U.S. and the U.K. do. Just as police do not now resort to their firearms against everyone who carries a gun, they would not do so in the future against everyone who carries a Molotov cocktail. And when they do, the bill states that their response should be proportionate only to neutralize the attack.

Opposition: Brace for more “extrajudicial executions” and police brutality, as even a stick can be considered “injurious.” The European Court of Human Rights seriously limits the police’s use of firearms even in the situations of self-defense. The bill will worsen the current problem, related to the use of police force in Turkey, where a police officer shot dead unarmed Gezi protester Ethem Sarısülük in 2013, only to sentenced to a light sentence of just eight years in prison.

As the “slingshot auntie” of Gezi protesters, Emine Cansever had attracted worldwide fame thanks to this photograph from veteran AFP photographer Bülent Kılıç taken during the mass demonstrations in Istanbul in spring 2013. AFP photo

How it is now: Article 34 of Turkey’s Constitution grants the right to demonstrate peacefully without prior permission. Law 2911, however, states that demonstrators should notify administrative authorities, like the governor’s office, at least 48 hours before the event, allowing Turkish governments to use the term “unpermitted” demonstration.

Government: Some protesters have been using slingshots like “catapults” and iron pellets as their shells. Several policemen and civilians have been injured as a result. Meanwhile, organizations like the outlawed Kurdistan Workers’ Party (PKK) and the Revolutionary People’s Liberation Party-Front (DHKP-C) have been staging parades with their uniforms and the public conscience was hurt that the police could not intervene to stop them.

Opposition: The only condition for the police to intervene to stop a protest should be the use of violence. Covering your face or wearing a uniform can be forms of expression, but not violence. Moreover, will the police detain a child for carrying a sling in a crowd? The bill’s criteria are vague and open to abuse of power.

How it is now: Current laws and regulations give relatively broad powers to elected local officials, like mayors and prosecutors over matters about public order.

How it will be: Administrative chiefs who are appointed by the government, like governors, will assume some of the powers of prosecutors, like being able to issue orders for the police to investigate a crime and find the culprits. They also get the authority to use all publicly owned vehicles for public order and security. Any public servant who does not comply with their orders can be jailed from three months to one year in prison, the bill says.

Government: The Kurdish problem-focused Peoples’ Democratic Party (HDP) mayors in the southeast have recently prevented fire trucks from being used to disperse fires during violent protests. The bill is designed to prevent a repeat.

Opposition: Transfer of power from prosecutors to administrative chiefs is against the Constitution. If the bill passes into law, a governor will be able to send a mayor to jail for not providing riot control vehicles (TOMA) with water.

How it is now: In urgent situations, the current law allows Turkish security forces to conduct intelligence wiretapping for 24 hours without a judge’s permission.

How it will be: The bill increases the time limit to 48 hours. It also stipulates that the wiretapping official should notify superiors, but only the Ankara Court of Serious Crimes will be authorized to decide whether the wiretapping will continue or not.

Government: The changes are designed to stop ill-intentioned and abusive wiretappings. The increased level of control will make arbitrary decisions harder. To specify a single court to oversee these activities will make the control more efficient and systematized.

Opposition: More arbitrary wiretappings will be seen as the permitted time is increased. With this change, the government is trying to exert full control over wiretappings, stopping those that would hurt their interests, such as investigations into their officials implicated in corruption probes, and making longer wiretappings with no court order against their political opponents.

Related entries: Turkey passed a law that allows police to shoot at protesters