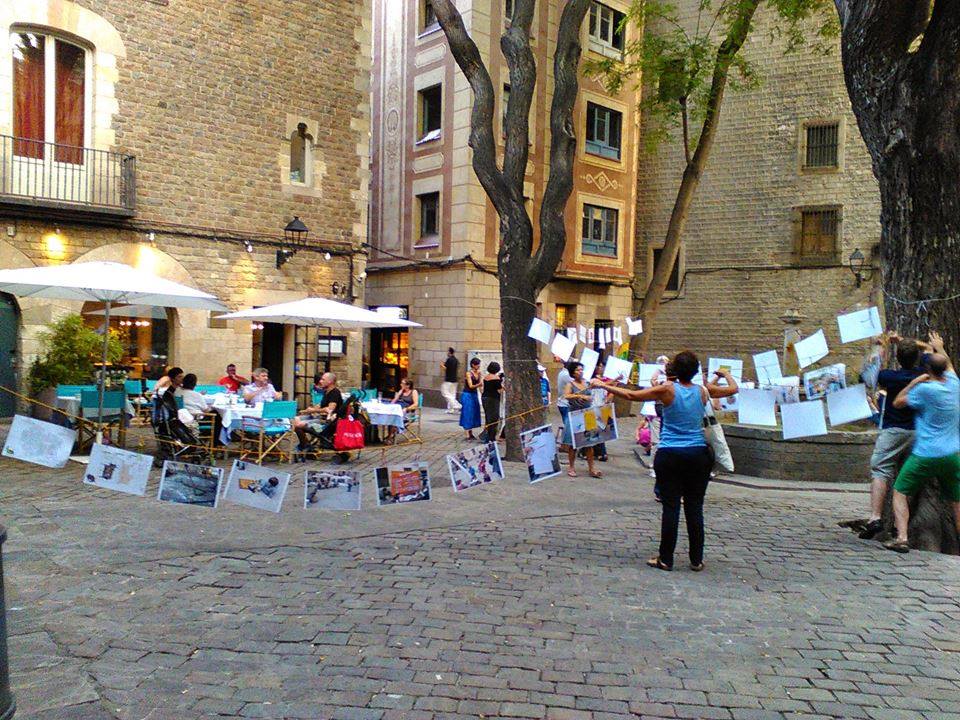 Fem Plaça – means something like “Let’s make square” in catalan language – is a collective practice pushed forward by the neighbors of Ciutat Vella, in the center of the touristic Barcelona. Here, the locals feel like an endangered species, struggling to resist and to represent themselves in the everyday public realm.
Fem Plaça was born to make visible the lack of public space, understood as a physical, but also a political and relational space. Fem Plaça’s actions develop as temporary and itinerary meetings in the squares of the district, reclaiming public spaces where you can sit, play, chat and exchange experiences.
Gentrification, massive tourism and the consequent privatization of public space, is creating conflictive situations for the neighbors of Ciutat Vella, that have been seen reducing their possibility to move and to sit in a square without being advised to consume in a bar terrace. Due to a massive occupation of visitors, and because of the adoption of a preventive design of urban furnitures for the city, the Council thought that a good solution would be to remove public benches. And now the feeling is that the tourists have gained more power in the shared space of streets and squares of the neighborhood, to pass, consume, party, and then leave. The result is, in the everyday life of the neighbors, that there are no benches to sit, but a lot of chances to have a beer or a coffee in a bar terrace. With these actions, Fem Plaça collective is trying to highlight this problem, and at the same time to find moments and spaces of meeting and exchange between locals.

Step 1 – PREVIOUS ASSEMBLY
There’s a previous meeting organized in the square where we want to develop the next action, as a possible place to occupy temporarily, just for one afternoon. A call is made in the neighborhood and on social networks, so that people who are interested can come and share ideas. The aim is to grow a bigger voice and to involve more neighbors in the actions.

Step 2 – GENERATION OF CONTENTS / NETWORKING
To produce each event, a specific network is generated, where every neighbor brings his knowledge and expertise. Graphic communication, historical excursus, logistics, generation of a manifesto to explain the problematics of each square, invitation to entities and collectives of the city to participate and support, during the day of the action.

Step 3 – COMMUNICATION
Online and offline communication of the event, both through social networks and giving out flyers within a radius of 100 meters around the place of the event.

Step 4 – LOGISTICS
Preparation of the materials needed for the specific action, including food and drinks. A self-built cart serves to carry all the stuff for the action: chairs, games, chalks, drawing material, an itinerant photo exhibition of previous actions. The entities that are nearer to the chosen square, use to carry extra chairs.

Step 5 – FEMPLAÇA ACTION
The day of the meeting in the square, occupying the space without asking any previous permit to the Council. We were never asked by the police, or have had any problem with them. When children come out of school, they’ll come to play and draw with chalks on the pavement. It’s a nice way to stop by and know your neighbors, play with the kids, listen to stories and histories of the surroundings, mesure the private occupation of bar terraces and report.

TOOLS
– Cartographies of the squares (measuring the occupation of terraces, the lack of benches, fountains, etc)
– “Com Fem Plaça?” itinerant exhibition – is used to inform and to separate spaces of the square
– Fem Plaça cart, to bring all the materials to the squares, and also an identitary element of the actions
– Manual Fem Plaça – DIY Fem Plaça with instructions (download)