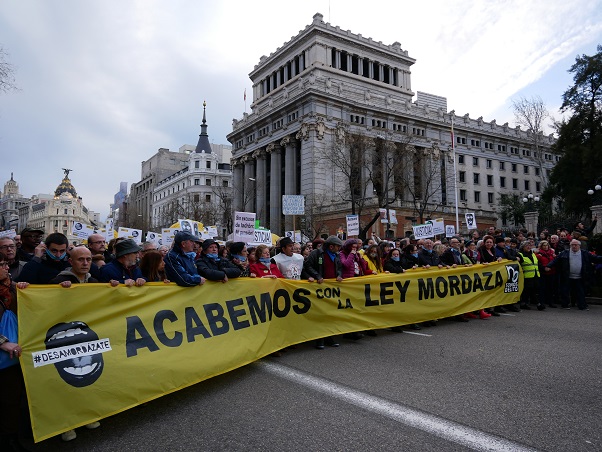 On March 26, 2015, the Congress – with an absolute majority of the PP party- gave the green light to the approval of the Citizen Security Law, with the unanimous rejection of the opposition. A few months later, most of the groups appealed to the Constitutional Court. According to this regulation, what previously appeared as a lack, is now an administrative infraction, which can range from very serious (fined between 30,001 and 600,000 euros), serious (from 601 to 30,000 euros) and mild (from 100 to 600 euros).

Around 40,000 people, according to the Government Delegation, have traveled the streets of Madrid on the afternoon of March 18 to demand the repeal of the Citizen Security Law, in a march in which many attendees have demanded decent pensions from the Government. Under the cries of “Freedom of expression and right to pension” or “They steal our pensions and gag us,” among others, thousands of protesters have joined several claims and have toured the city center in a mobilization called by the platform “We are not a crime” and to which the State Coordinator for the defense of pensions adhered.

The march left at 6:00 pm from a crowded Puerta del Sol and arrived two hours later at the Plaza de las Cortes, where the Congress of Deputies is.

Many of those attending the march have carried a gag in their mouths. During the demonstration, called nine days before the third anniversary of the Law of Citizen Security, slogans have been heard such as “the gag law is a threat”. Several of the participants in the protest have explained that this law “cuts rights and undermines freedom of expression” and has caused the loss of democratic quality in Spain.