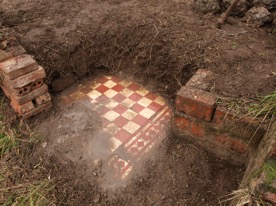 The project began with choosing a site and digging. Based on the remains of buildings unexpectedly found on this wasteland on the outskirts of the city, it then turned into the “restoration” of a ruin, in the form of a sculptural-architectural space. As the work progressed, its many layers and potential became clear, and it expanded to a second “archaeological site” with a similar dynamic, creating something like resting points or “lookouts” forming part of the landscape.

From that point onwards, our task was to start to clean, clear-out, and level the area with the help of two hoes, and the idea of generating a sculptural space that would blend into the environment: lookouts or vantage points. As we dug, we realised that the soil was full of construction debris, and our work became a process of selection and classification of the rubble which we then incorporated into our sculptural action. The material and remains that we discovered shaped the work, becoming a key aspect of the construction process and the formal appearance.

After months of work, the site began to take on an identity, and the people who passed by began to take an interest in it. Passers-by were surprised to see us work because there seemed to be no apparent sense to what we were doing, and there were no recognisable points of reference. A man who regularly walked in the area revealed the historical identity of the place: a shantytown had occupied the space from 1945 until it was forcibly transferred to “Otxarkoaga”.