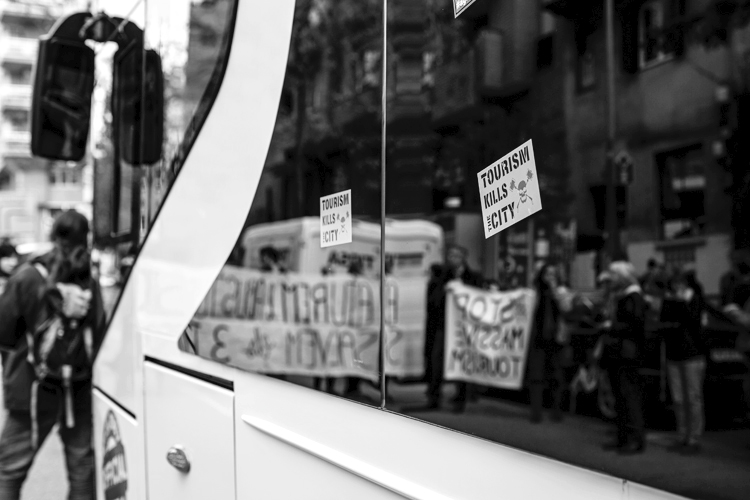 The North American urbanist and historian Lewis Mumford, author of the colossal work The City in History (1961), described a new phenomenon: the spread of suburbia across the length and breadth of the United States in the fifties, in order to house a growing white, salaried middle class. He was not talking about brand new cities or about the expansion of existing ones, but about a new type of dispersed urbanisation scattered throughout the land, connected by huge road networks but lacking urban centres or shared identities.

Mumford – and some of his followers, including Murray Bookchin – believed that this new megalopolis was becoming a force of social and even mental segregation, which denied any possibility of the city as cultural project, breaking down public and the social spaces of gathering and conflict. As urban developments without the characteristics of a city, these new mass residential suburbs on a mass scale where an “anti-city”, Mumford said. They were created for the purpose of containing undifferentiated, indifferent lives. They were incapable of generating community or association, incapable of producing city.

A few decades later, the French anthropologist Marc Augé coined the concept of “non-places” as a spatial category for postmodern times. “Non-places” are spaces of transience or waiting such as airport lobbies, underground stations, ATM and supermarket queues. Users have a purely contractual relationship with these spaces, and their commercial solitude makes it impossible for them to inhabit them, to turn space into place.

Now, the evolution of metropolitan mode of production is going one vertiginous step further: the categories of the anti-city and non-places are shifting from the margins to the centre, and materialising with disturbing propinquity.

The Capitalist Totalisation of Space

Indeed, the anti-city is no longer a phenomenon that occurs outside the city. Instead, it pierces the city, it sucks it dry from within. Similarly, non-places are now not just aseptic, anodyne hotel terminals and stations; they have moved into the heart of former working-class neighbourhoods that had until recently been vibrant and full of people. Hotels and tourist apartments are replacing housing – homes – on a mass scale. New economic activities targeted at a floating population of tourists are transforming urban production: laundromats with invisible staff, rolling suitcases rather than shopping trolleys, coffees for four euros, signs outside shops in English “wifi and cookies home made”.

Local residents are expelled from the neighbourhoods that they themselves created through their everyday activities and collective struggles. Their presence is only accepted – if they are lucky – as temporary employees in the new “extreme precarity”. People’s lives and jobs are replaced by transience and by activities that are indifferent to the environment, by users with a purely “contractual relationship with the space”. Working-class neighbourhoods are being erased by an active force of social dissociation that repels community and association. The entire city is at risk of becoming a huge hotel, a massive airport, a humongous vending machine, an infinite terminal, a monopoly board for investors.

Nonetheless, anti-cities and non-places are an accidental reality, the result of one particular kind of economy, one specific form of capitalist production of space. And they are the spatial condition that is becoming widespread in the new tourism-property accumulation regime – a post-crisis systemic restructuring in which tourism replaces bricks and mortar (or the tourism industry replaces construction) as the means to intensify the rent-seeking and speculation of urban land. In this regime, financial and property capital (as well as technological capital – damned Airbnb) determines the destination of investments as well as the structure and distribution of income. As the president of a Barcelona-based French investment group said: “There is a huge stock of housing intended as first or second residences that the market is unable to absorb, and we have turned it into apartments,” (Gutiérrez, S. “El turisme salva el totxo”, El Periódico, 10 April 2014). This new profit-hungry accumulation regime seeks the capitalist totalisation of urban space.

A New Cycle of Struggles for Urban Collectivisation

Staving off the anti-city and the spread of non-places in order to reempower the city – and life – requires a direct attack against the tourism-property accumulation regime We need to activate a new alliance of popular, socioeconomic, feminist, and environmental movements that can defend urban grassroots sectors against the attack of tourism-property capital. Neighbourhood associations, community facilities, social and solidarity economy initiatives, local and mutual support networks, undocumented migrant associations, organisations of people affected by extreme precariousness, and new social unions must join together and continue on the path taken by anti-eviction movements, activate joint mobilisations, conquer new spaces, and work to ensure that municipal and autonomous community governments are at the service of urban social reappropriation.

So if we want our city to be the fruit of the desires and needs of the people who live in it, a city at the service of the expanded reproduction of life, we must urgently move towards the collectivisation of land ownership in all possible modalities: nationalisation, municipalisation, cooperativisation, socialisation, squatting, citizen control. It is becoming increasingly clear that urban collectivisation and reappropriation are the only means that will allow us to realize our plan for a cooperative, mutually supportive, feminist city.

Tomorrow will be too late.

*Ivan Miró is a sociologist and cooperativist. This article was published in Basque in Argia.