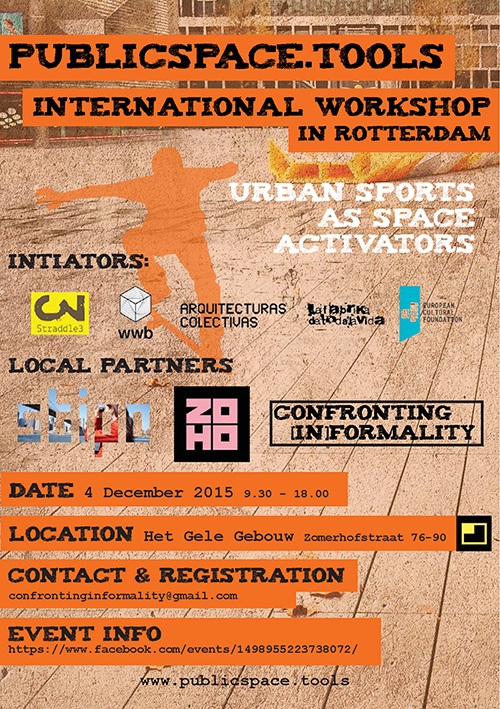 Place-making, citizen empowerment and the right to city are concepts which have grown in popularity during the last decade. In the Dutch context multiple design collectives and companies within the fields of planning and (landscape) architecture have focused on utilising the aforementioned concepts in order to facilitate the urban development in 21st century.

In order to work on these topics and, more specifically, the idea of PublicSpace.tools platform, a one-day workshop has been organised on 4th December in Rotterdam. The host and a local partner of the event was Stipo – an urbanism office that operates as innovators, initiators, developers and project managers of urban development schemes. The workshop was specifically focused on the theme of urban sports and more precisely, on urban skating as public space activators. Skating seems to have a direct relationship with the public space, the empowerment of citizens and legal issues. At the same time the theme allows the event to go in a certain direction and provides some useful, at least modest, input for the platform.

For the purpose of the workshop the schedule was organised in a specific way defining three main parts. The morning session of the workshop consisted of three interactive presentations which aimed to provide the participants with the possibility of getting familiar with (1) the main concepts of interest that are behind the platform development and (2) the practical experience of Stipo (NL) and Straddle3 (ES). In the early afternoon a public safari, led by skater Niels van der Zwam, was made. It aimed to bring the participants to some of the most emblematic skating spots in Rotterdam. The last part of the workshop focused on the technicalities and possibilities of the PublicSpace.tools platform and practical knowledge concerning the legal norms in respect to public space in the Netherlands.

The morning session of the event consisted of three presentations made by Sander van der Ham (Stipo), David Juarez (Straddle3), Ale González (WWB) and Sergi Arenas. The introduction of the event was made by Sander van der Ham who is a representative of our host – Stipo. Sander shared some of the perspectives which stay behind the philosophy of Stipo and their inspiring approach towards public space intervention(s).

The next set of presentations was made by David Juarez (co-founder of Straddle3) together with Sergi Arenas and Ale González who are some of the main initiators behind the PublicSpace.tools project. First of all David introduced the participants into the theme of public space essence, its dynamics, specifics of the various uses, the “right to city” concept and legal issues in respect to it. Later on he was joined by Sergi Arenas with whom David presented their main practical experiences in working with urban skating development from organisation of collaboratively efforts to the actual execution of the construction works. 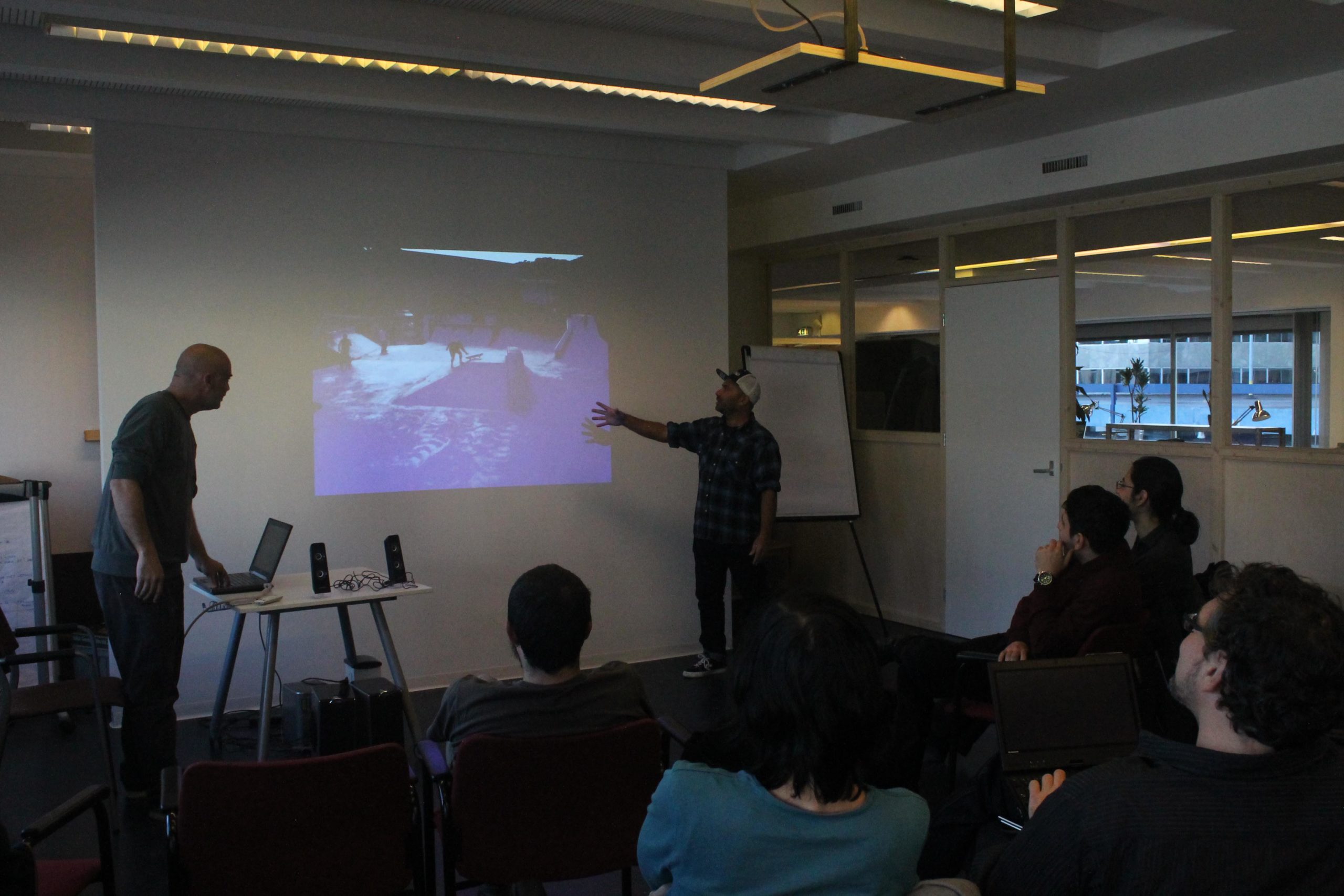 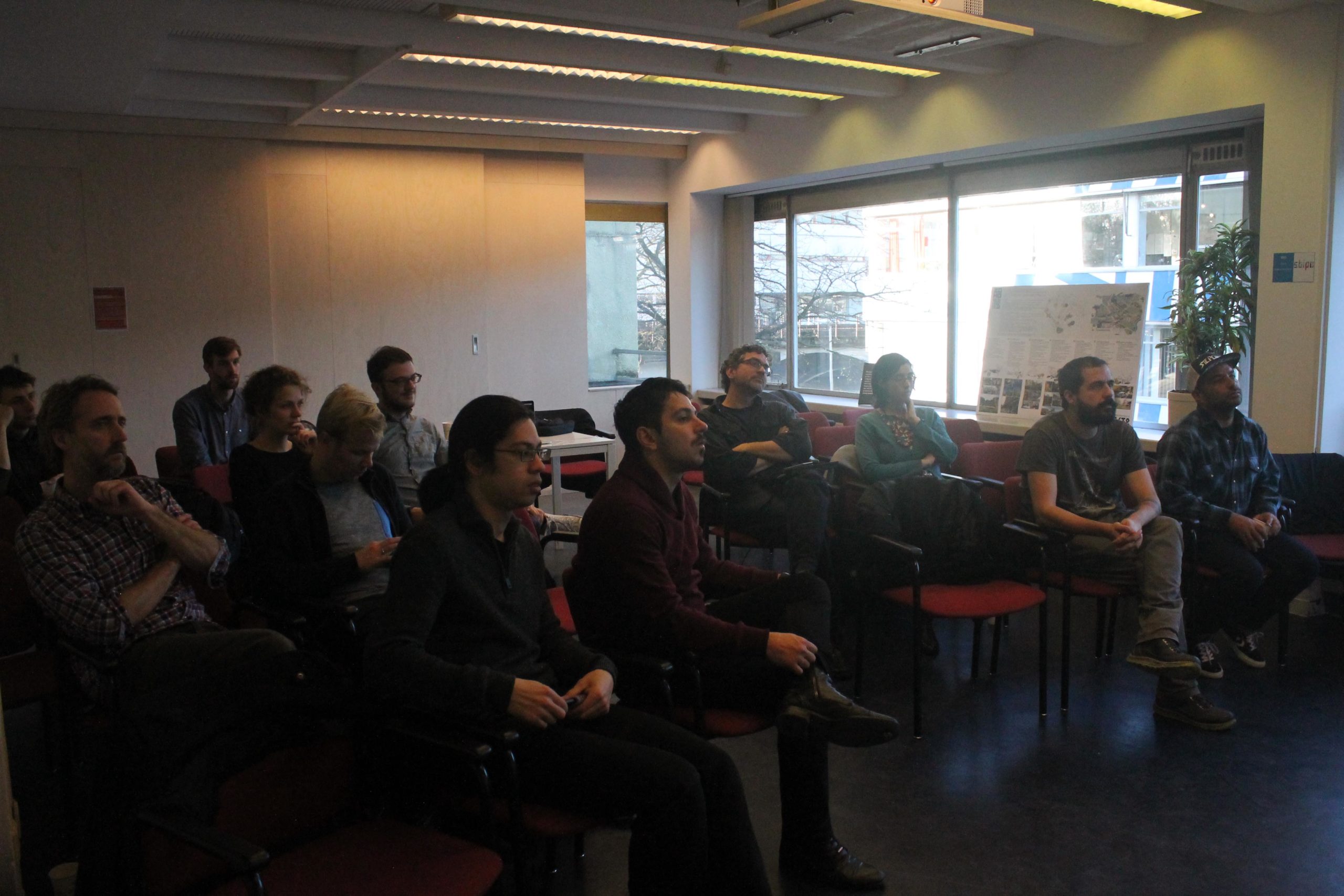 The last talk from this part of the event focused on PublicSpace.tools platform. David together with Ale revealed some specific details concerning the functions and capabilities of the platform combined with examples of how to collect data and use the platform to update it. With this the first part of the event ended and the participants had their time to take a break, enjoy the provided lunch and prepare for the public space safari. 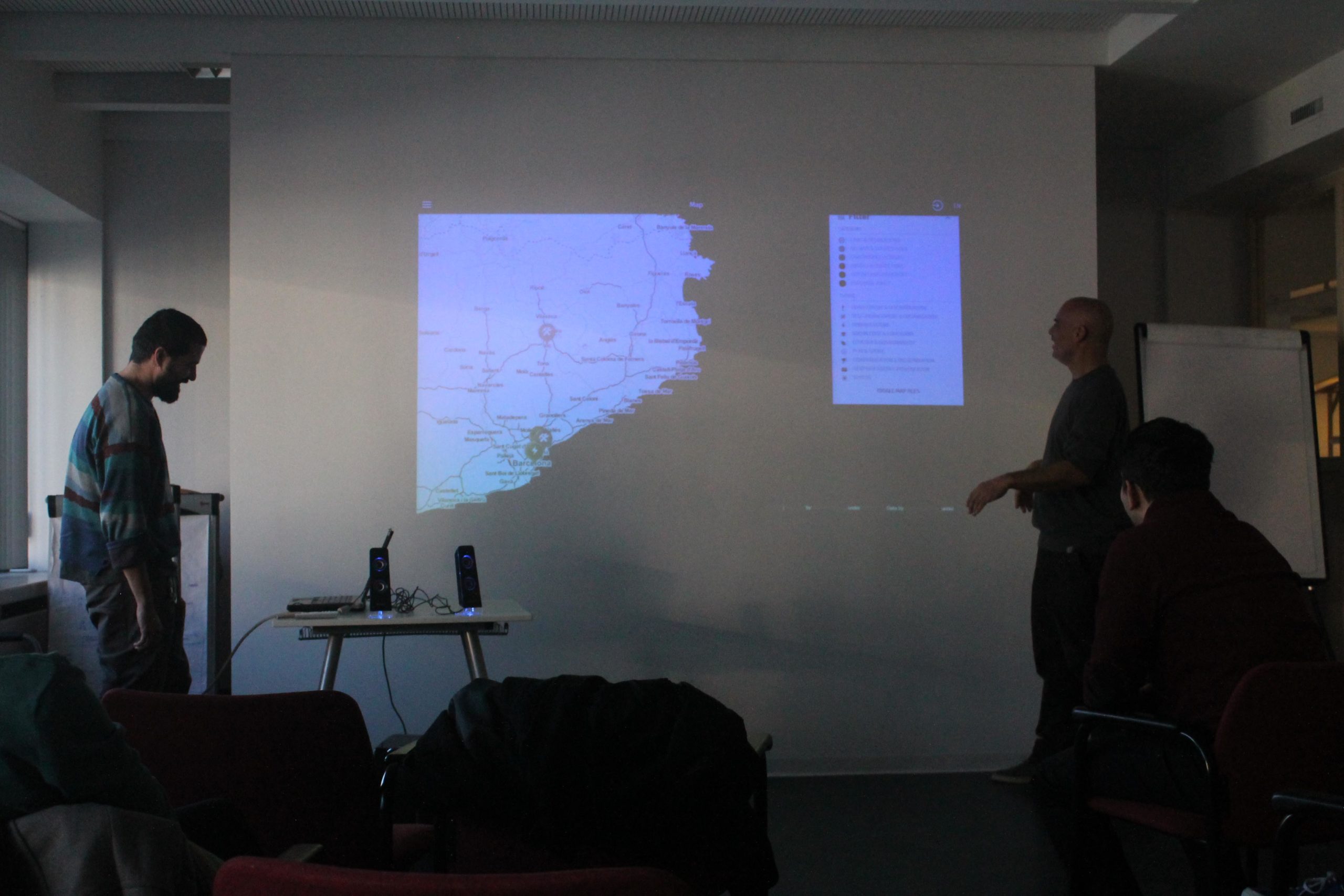 After the break the event included a group public space safari which was led by Niels van der Zwam, a developer and skater who is well-familiar with the context of Rotterdam. The safari included a number of spots that are meaningful for the skating scene in the city. Some of them are designed especially for skating but other spots did not have a pre-determined intention of including skaters as intensive users of the place(s).  A full description of the safari you can find here.

The places included in the safari were artwork and historic spots such as ‘Delftse Poort’, the City Hall’s bunker, the embankment of the Westersingel and heavy used public spaces such as De Lijnbaan (shopping street), the recently redeveloped Binnenwegplein and the new plaza in front of the Central Station. These spots have completely different purpose but reasons such as their spatial arrangement, surfaces and design elements have attracted special attention by the skaters. Despite the monumental value and meaning of some spots the skaters are not regularly engaged by the police. 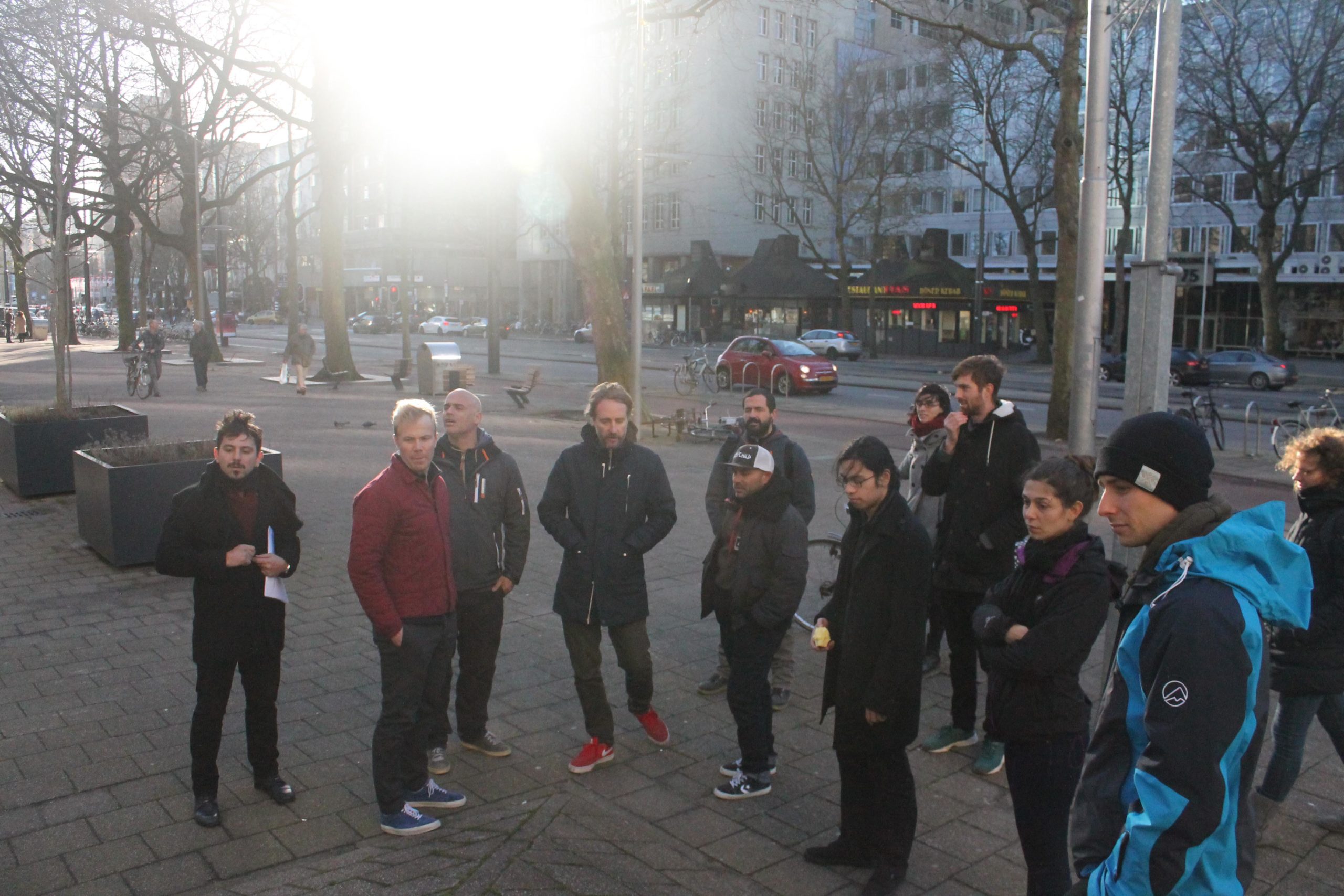 During the walk the participants had the possibility of visiting two places which were design especially for skating – the Westblaak skatepark and the Waterplein by De Urbanisten in the Agniesebuurt. The former location is a famous project in terms of the European skating scene and it is in its final stage of construction. On the other hand, at the Waterplein the possibilities for skating are provided in an informal way. 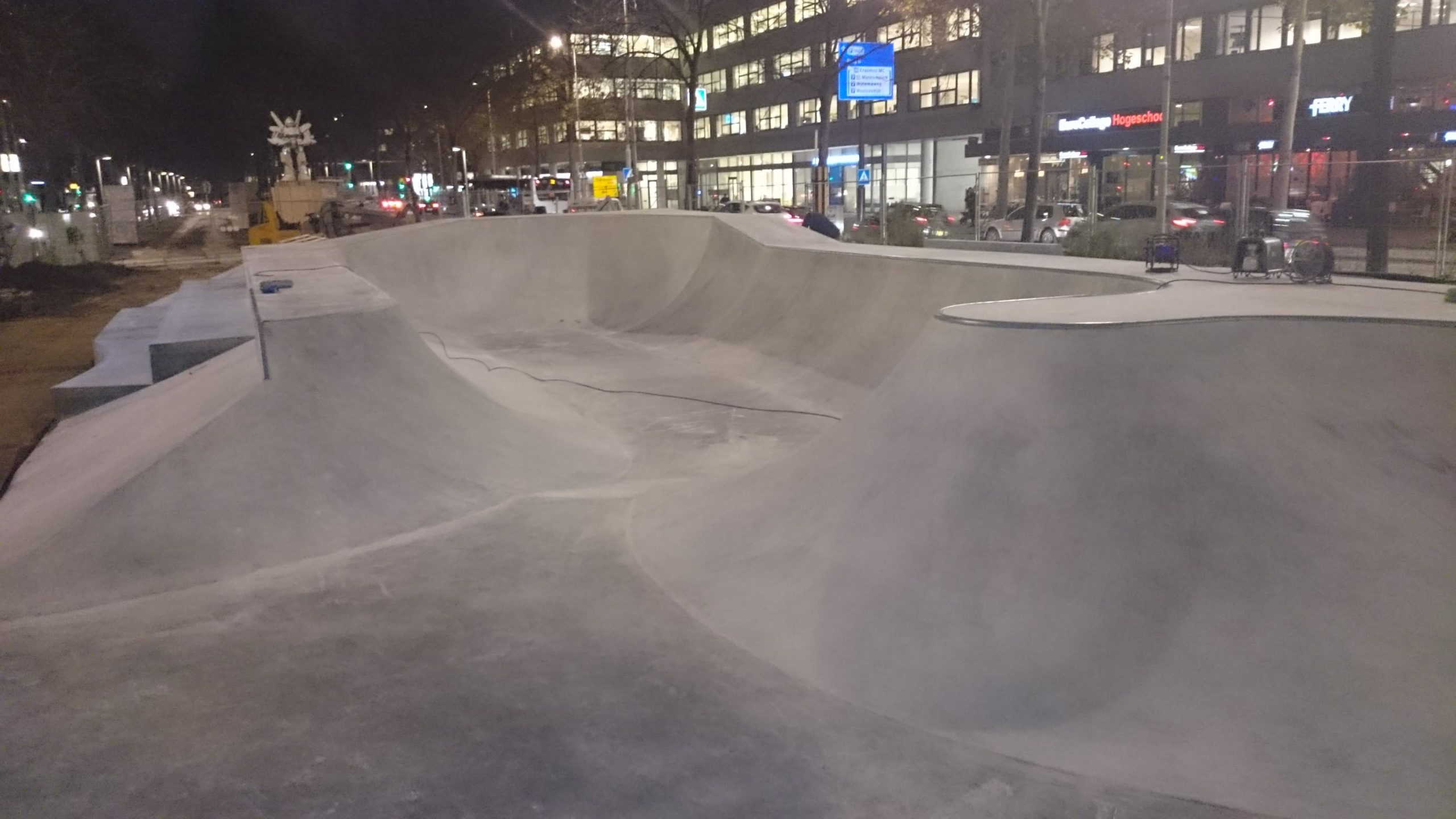 It is worth mentioning that during the public space safari some test uses of the PST mobile app were made in order to test the capabilities of the app in real time.

After the two hours walk in the city the public safari was rounded up and the participants got back to the host location of the workshop where the last stage of the event took place.

The last part of the event contained the practical exercises concerning the event. First, a legal exercise regarding the general behaviour and urban sports in public space was executed. Questionnaires with set of questions were given to the participants with legal questions to be filled up. On the basis of this a discussion on the legal issues in respect of the theme(s) of interest was facilitated.

The closing stage of the event was dedicated on testing and working on the platform. The participants were separated in two groups aiming to prepare content to be uploaded on the platform online. The first group focused on describing the public space safari in a great detail including specific description(s) of the visited spots. The post can be seen here.

On the other hand, the second group worked upon the preparation of content related to the executed legal exercise. They focused more on the organisation of the content into a visual expression. In any case, this content represents in full extent the ‘how-to’, normatively practical input which PublicSpace.tools aims to deliver for its users.

During the exercises couple of informal discussions raised in between the participants addressing the functionality and the capabilities of the platform. With this exercise the workshop came to an end. To sum up, the various activities that took place during the event provided the participants with a mixture of experiences. In result of this multiple informal connections were created which formed the basis for very fruitful knowledge generation and exchange. This was considered as the high appreciated positive that every participant was able to benefit from and hopefully build upon in future professional projects. 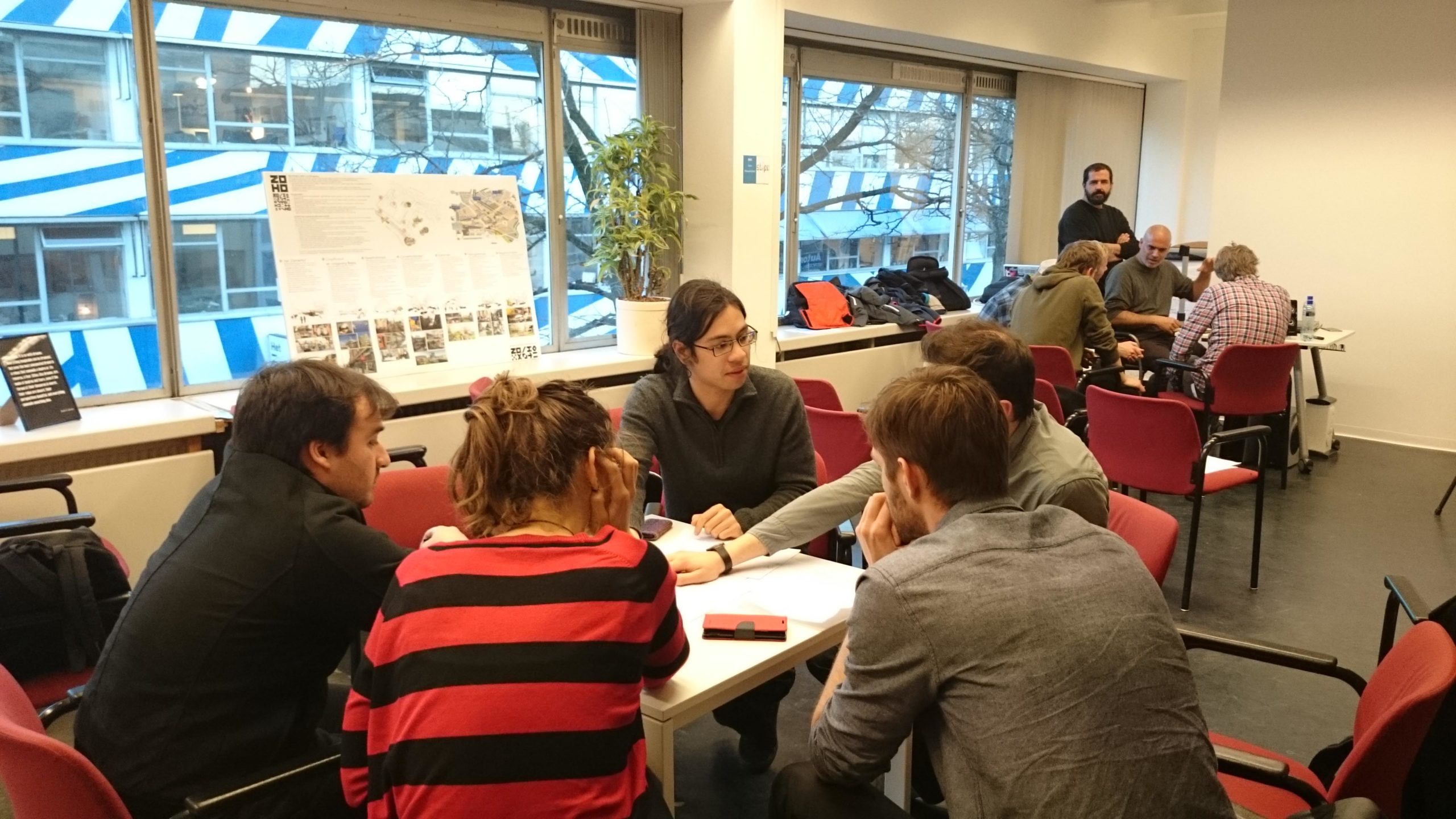 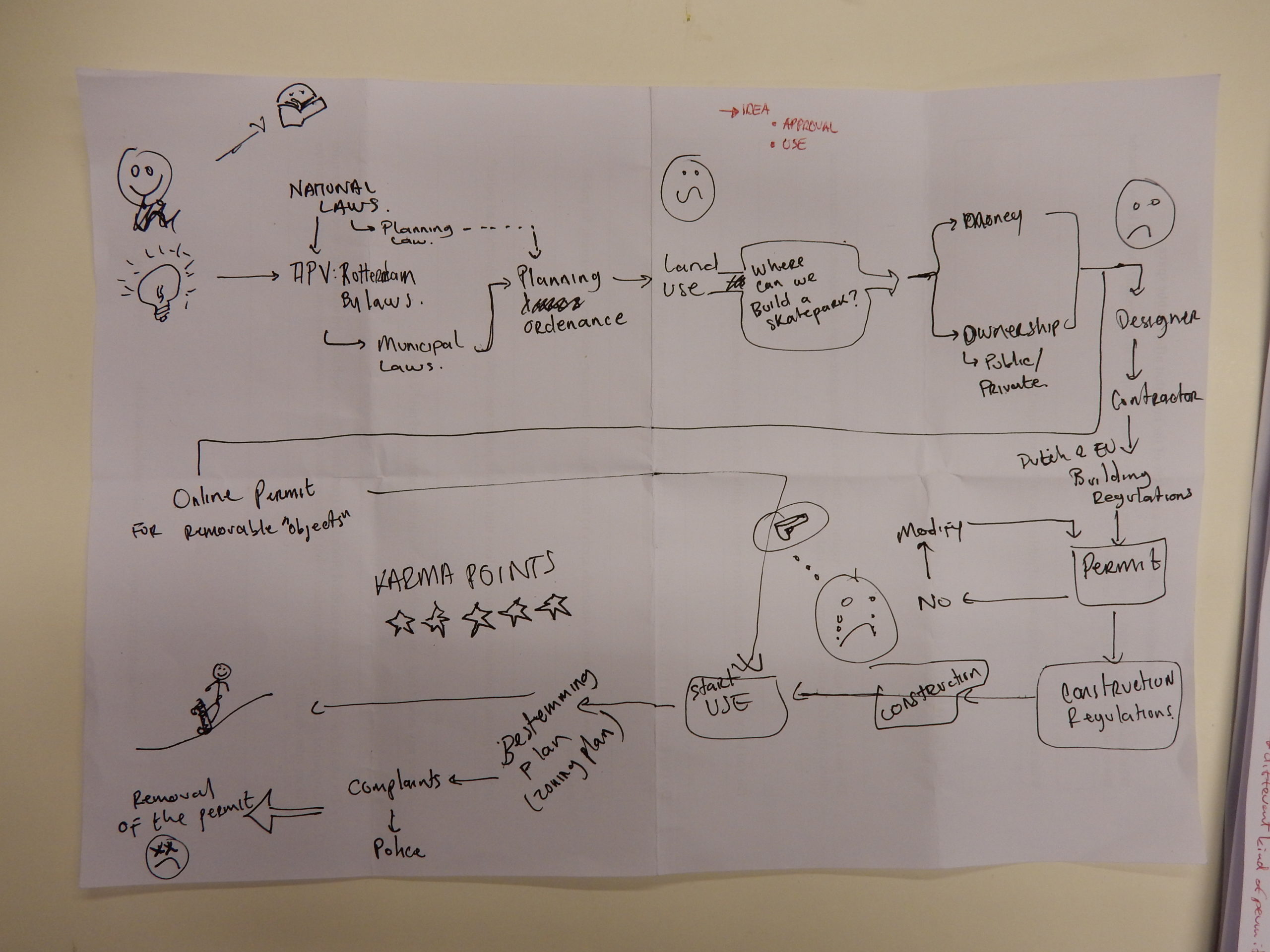