The citizen empowerment for interventions in public space is a theme that it is for quite a while within the discourse of urban development (planning, design and architecture). However, within the context of Bulgaria until very recently this topic has been neglected. The reasons for that can be traced back in the long tradition of dealing with urban development and any other structural issues through utilitarian highly top-down approaches.

In order to deal with the necessities for research regarding this theme in the Bulgarian context, on 31 October and 1 November it has been organised a two-day workshop focused on the Public Space Tools platform. The event was held in Studio “Projectirane” at the University of Architecture, Civil Engineering and Geodesy (UACEG, Sofia). From Bulgarian side the organisation of the event was executed by the association “|IN|Formal” while the local sponsors of the workshop were the architecture / urbanism offices “ATEK” and “Urbika”. 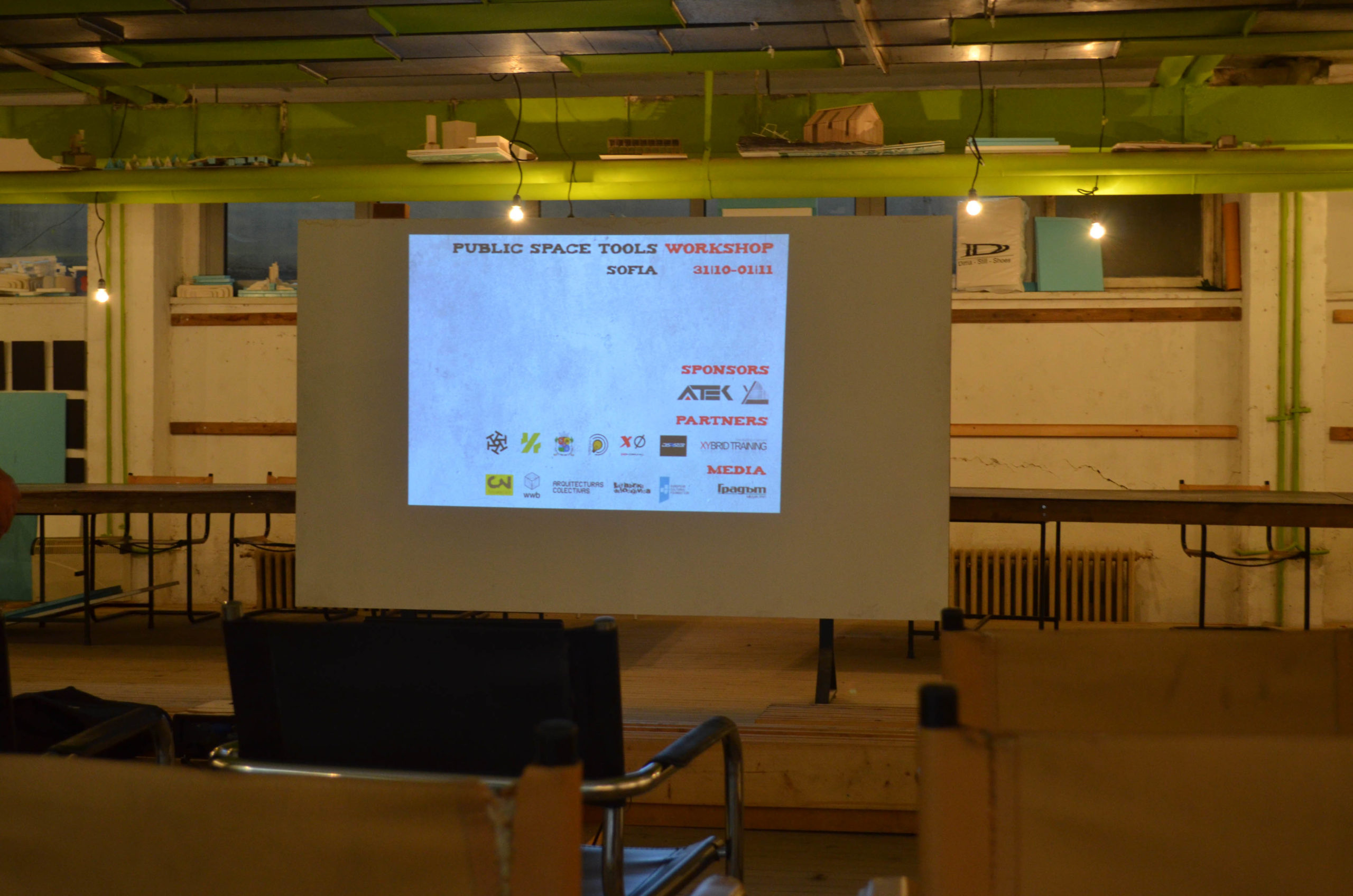 Apart from professionals and student within the sphere of architecture and urban design the event was also visited by civil activists, being experts in other socio-economic domains. Indeed, the collection of such a mixture of interested people was one of the major goals of the workshop. This environment provided possibilities for the creation of various and unusual professional connections with an intriguing potential directed to interventions in the urban space. The workshop was specifically focused on the theme of urban sports and more precisely, on urban fitness and skating. These two activities seem to have a direct relationship with the public space, the empowerment of citizens and legal issue. At the same time the theme itself allow the event to go in certain direction and provide some useful, at least modest, inputs for the platform.

For the purpose of the workshop the schedule each one of the two days was organised in a specific way. The first day was mainly consisted of interactive presentations which aimed to provide the participants with the possibility of getting familiar and exchange knowledge between them. During the second day the technical and practical part of the workshop took part. Respectively, some exercises with the online platform were executed. 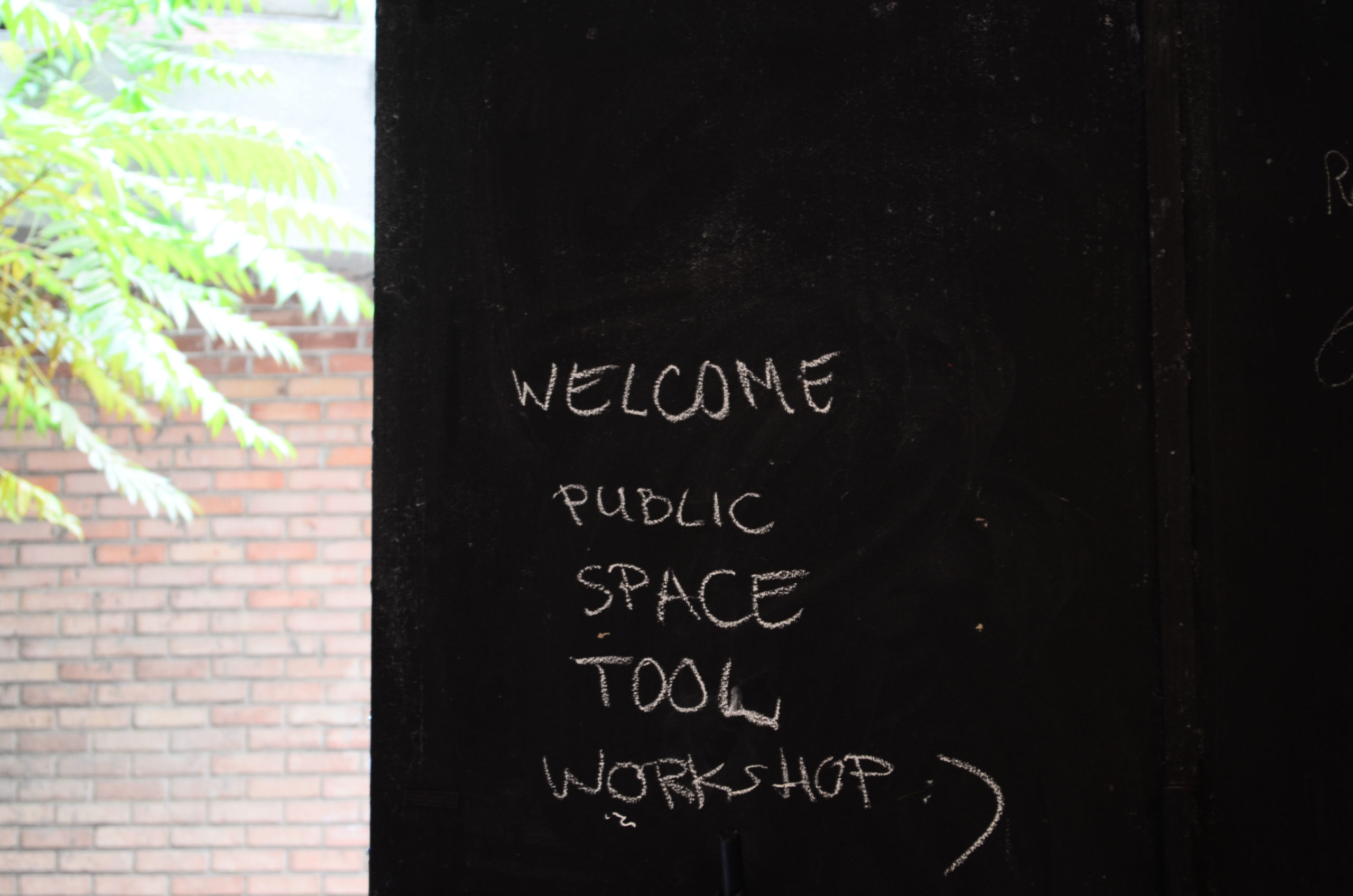 The first day was consisted of a series of presentation which aimed to contextualise the platform within the “right to the city” concept and the Bulgarian context. For achieving the latter goal multiple local professionals with an experience concerning unconventional urban transformations were invited. In addition, there were also presenters who shared their specific academic and legal knowledge in the field of public space as well as sport experts.

The kick-off of the event was made by David Juarez, who is co-founder of Straddle3 and one of main initiators behind the PublicSpace.tools project. He introduced the participants into the theme of public space essence, its dynamics, specifics of the various uses, the “right to city” concept and legal issues in respect to it. David also made a short introduction of the PublicSpace.tools platform which was further elaborated in a later stage of the day. 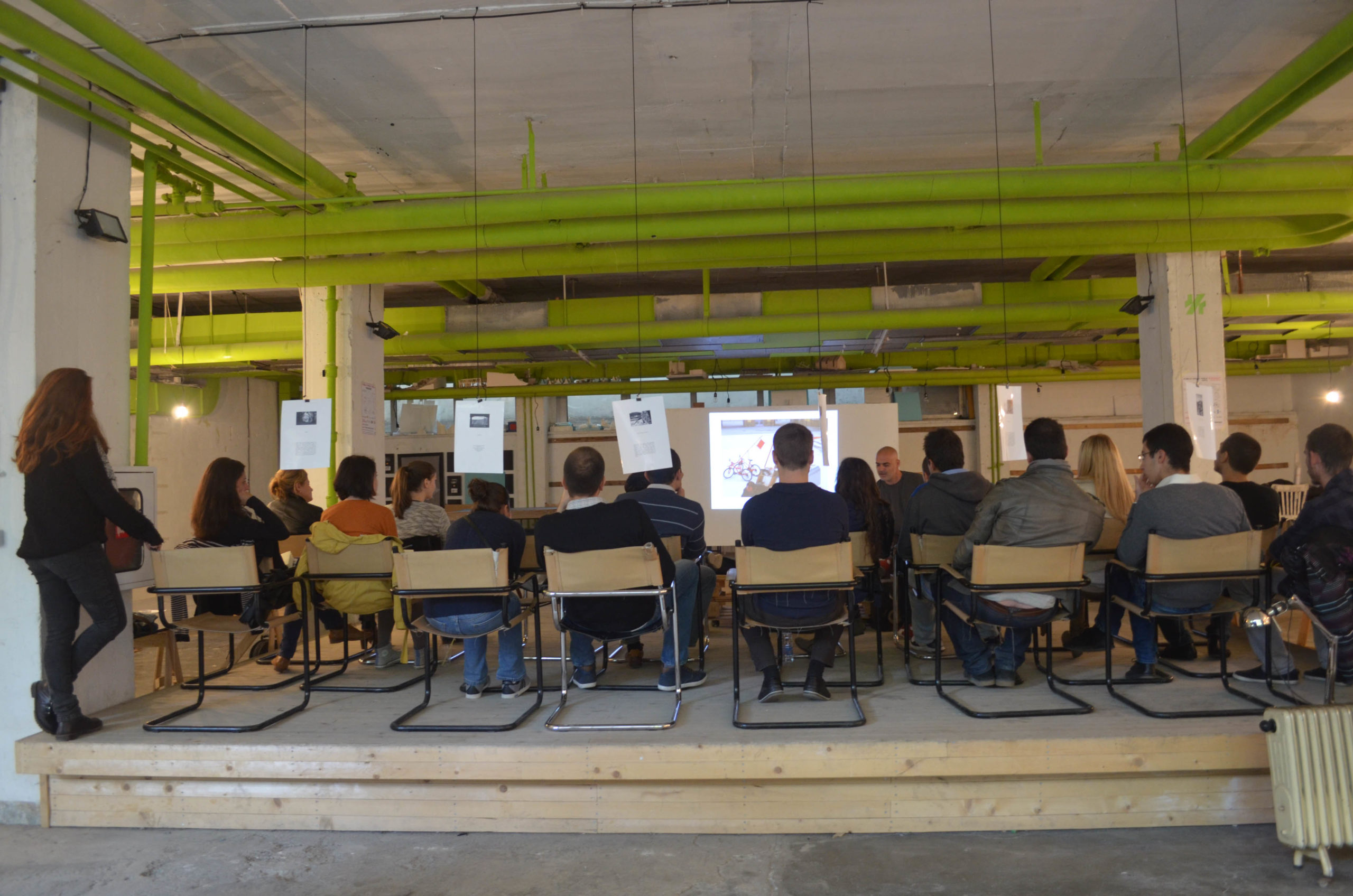 The next three presentations focused on the Bulgarian context including some intriguing examples of unconventional, bottom-up public space interventions. The first one was made by Rossina Shatarova (Studio Projectirane), who showed her point of view about the alternative ways of exploring and interacting with the public space as a way of professional education. She was followed by Valeri Gyurov, of the co-founder of Transformatori association, who presented part of their successful project and shared his experience in initiating civil engagement and participation in the urban transformational process. Emil Mihov and Teodora Trifonova (POdLEZNO) also shared their view by making a detailed overview of their physical interactions with public space in Sofia. In addition, Emil and Teodora made an interesting transition towards the following talks during the event i.e. legal frameworks within which the various types of interventions in the urban environment took place.

Indeed, the next presentation was made by Tanya Prodanova and Martina Nenova by taking their role as experts at the Architectural and Urban Spatial Development Service (AUSDS) within the structure of the municipality of Sofia. They revealed more concrete details concerning the different definitions, regulative zones and legal possibilities for public space interventions outlined by the normative documents and acts. What is more, Tanya and Martina also paid substantial attention on the required documentation and the administrative procedures which can guide and ease the physical interventions within the urban environment. 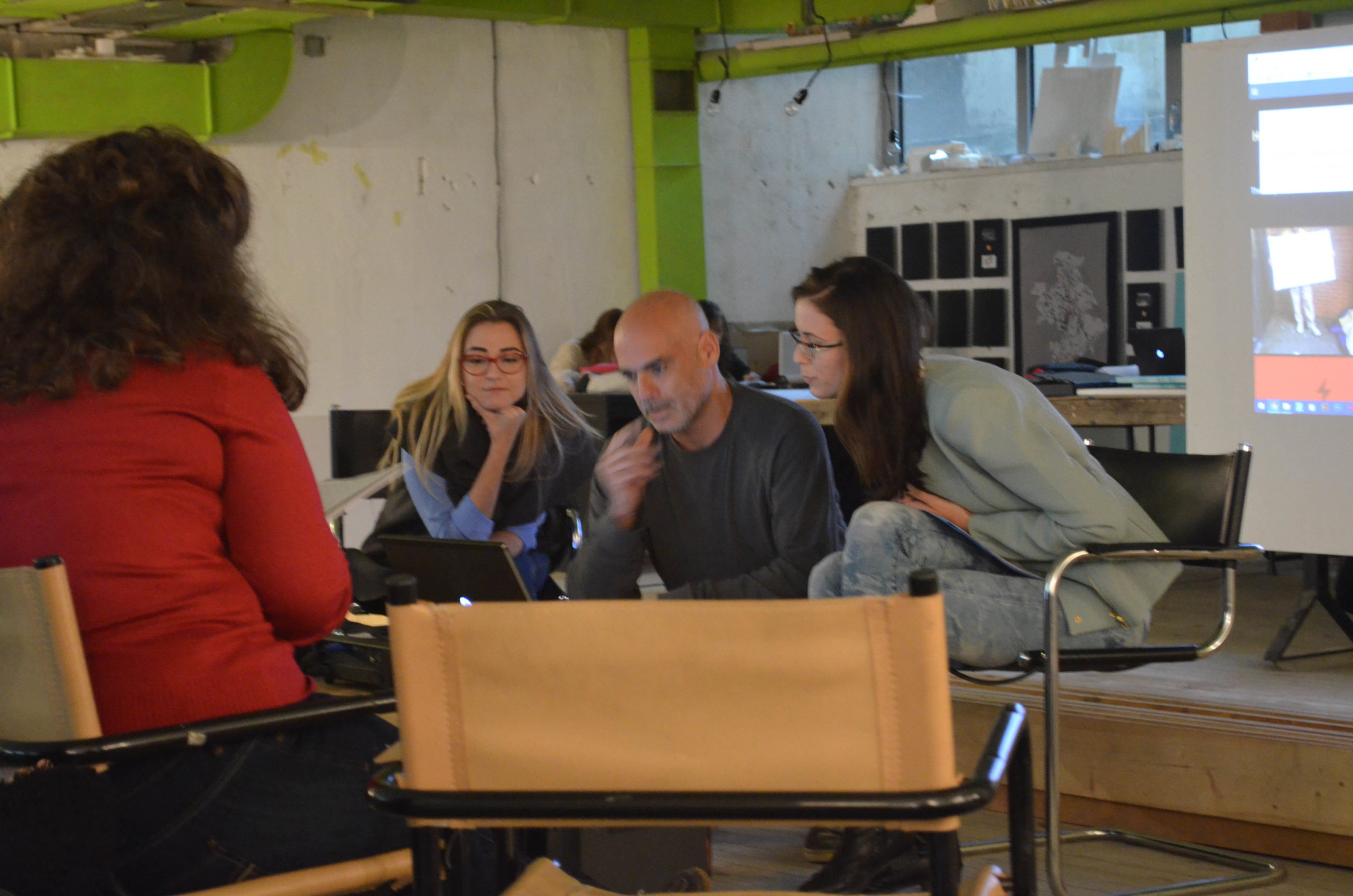 After a scheduled lunch break the last two presentations took place. They provided a slightly different and intriguing interpretation of major theme of interest i.e. the public space. The talks were led by two experts in the field of urban sports – Ivan Germanov (Urban Fitness) and Georgi Spasov (Urban Skating) who presented the perspective of the sport enthusiast within the urban environment. The interesting part was determined by the part that both Ivan and Georgi concluded with statements about public space that are generally well-accepted also by the professional and academic field of urbanism and architecture.

The last talks were followed by a debate on the themes which were discussed during the whole presentational day. As an epilogue of the first day some more specific details concerning the functions and capabilities of the PublicSpace.tools platform were made combined with examples of how to collect data and use the platform to update it. With this the first day of the event ended and the participants had their time to make a short fieldwork to gather impressions and ideas on the basis of which can use the platform on the second day of the workshop.

The second day of the event continued from the point where the first one finished. After the theme of the citizens’ empowerment was defined in contextual, conceptual, professional and legal terms the second part of the workshop focused on the technical and practical exploration of the PublicSpace.tools platform.

Since the platform was a project which in beta version at the time of the event it was aimed the participants to exercise and test its functionality. By doing so and respectively reflect on their user experience they contributed to the further technical development of the toolkit. Despite this, the participants were provided with a log-in access through which they had the possibility to explore the added content. What is more, after being granted with an individual access they could prioritise certain part of the general content in respect to their specific context and interest.

During the exercises all details of the platform including technology, structure, functionality and types of content were reviewed. In the span of few hours the numerous possibilities for the platform’s enhancement were discussed in a form of informal discussion by the various professionals who were present – architects, urban designers, computer specialists and sport enthusiasts. In addition, the participants shared their view upon how the platform can be useful in achieving different goals.

In general, the presented content during the event and the created setting provided a quite fertile environment for knowledge exchange. In these terms the workshop was highly evaluated by the visitors who took part. The mixture of presented information certainly granted the workshop guests with an intriguing opportunity to enrich their knowledge regarding the theme of citizen empowerment and the “right to the city” concept. Moreover, the numerous professional relationships which occurred during the workshop were positives that might have a long-term impact and optimistic prerequisite concerning further development of the thematic research and the actual application of the PublicSpace.tools platform in Bulgarian context. 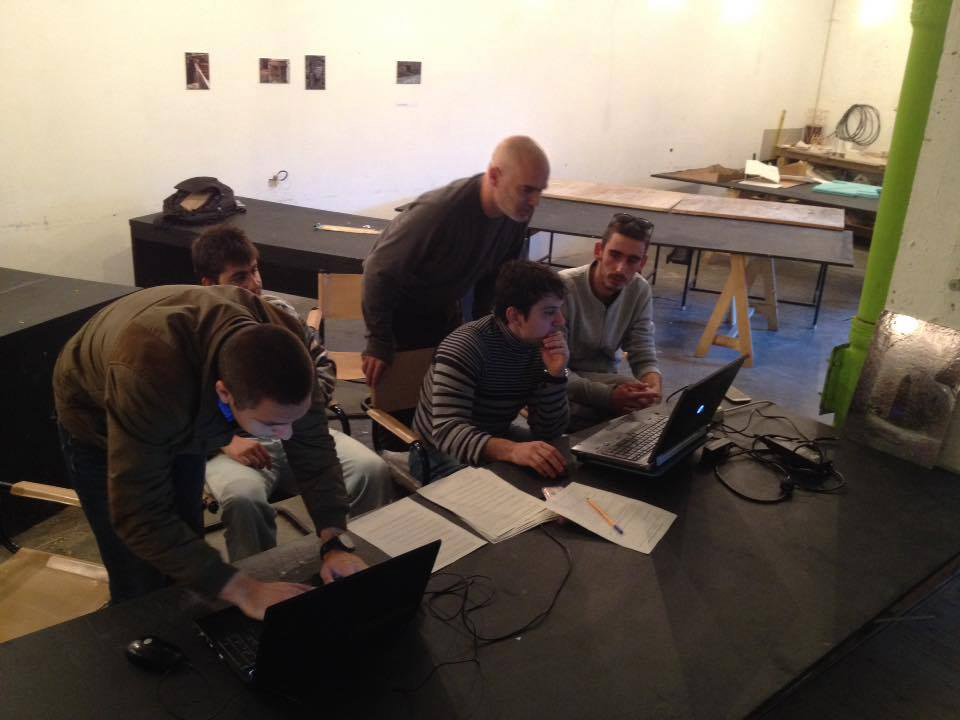